This morning started off a little later. My alarm went off at 5am and I turned it off only to wake up again at ten minutes to 6. I guess I needed to rest. Either way I started hiking around a quarter to 7 and made incredibly good time down to the road. The light pack with no food in it may have had something to do with that. The ﬂies came out and started messing with me around 10am so I threw the bug net back on and kept on truckin’. Got some trail magic at the road and halfway through drinking my beer a guy named Fred pulled up and took me into Dunsmuir. Didn’t even have to hitch, too easy! This evening I became the lucky recipient of some free Brandy served in a red solo cup from a lady celebrating Independence Day on the main street in Dunsmuir. I took three shots with her and she tried to get me to keep drinking, but I had to keep it moving. I watched Armageddon in the hotel room. What a terrible movie.

Took the bus into Shasta which was surprisingly quick. Got a new set of insoles called “Downunders” that I was told were made by the guy who designed “Super Feet” insoles. Ate the pizza buffet and salad bar at Round Table which was scrumptious and filled the cavern that my stomach has become! On the way back to Dunsmuir I caught a ride from a guy named Mike who is into hiking and lives near Castle Crags. Chilled the F out through the afternoon and relaxed super hard. Great day. Mantis, out of the kindness of his heart allowed another hiker named “Cowboy” to crash in the room with us for the night, unfortunately Cowboy’s feet smell like sulphur and skunk.

Watched world cup all morning. France beat Uruguay 2-0. Belgium beat Brazil 2-1. I got three slices of free pizza and a beer at Pizza Factory from some really kind local guys while we watched the Brazil vs Belgium match. Couple beers under the bridge by the Sacramento River, then back to the trail. A guy who works at the Railroad Park Resort named Pete gave me a ride back to the trailhead. Just before the ﬁrst water source after Interstate 5 I saw a baby skunk. It turned its tail up at me but luckily didn’t spray. I ended up walking 6.3 miles to Sulphur Creek where I pitched my tent for the night at around 6pm. I was talking with a section hiker near camp and as he walked back onto the trail I heard a rattle. I thought the guy was messing with me until I spotted the greenish gray rattlesnake with a black and white tail about ten feet from my tent. It startled the hell out of me at ﬁrst due to it’s proximity to my tent and my inability to see it for so long. So that’s 6 rattlers now.

This morning when I awoke (thankfully no rattler was snuggled up under my tent) the entire valley was full of smoke. My feet began to hurt quite badly just before lunch, possibly due to the long uphill which ascended roughly 4,000 feet. Thankfully it was mostly shaded. I didn’t see a whole lot of animals today other than birds and lizards. The ridgeline walking was superb and as the smoke cleared throughout the afternoon the views kept increasing. At the second road crossing there was a couple parked having lunch named Alex and Grant from Ashland, OR. Alex offered me a hard boiled egg and a banana which were both fantastic! They also offered me a place to crash in Ashland when I get up there in a couple weeks. Epic! The campsite this evening by Porcupine Lake is seriously one of the best spots I’ve had on trail so far. Fish jumping in the lake, minimal mosquitoes, the only downer is that the smoke is making its way back. Gorgeous sunset to end the day!

As soon as I walked into the campground a border collie rushed me barking its head off. The owners got it back under control and then offered me sausages and a couple cold drinks. Amazing! This morning was lovely, as soon as my feet loosened up. Nice breeze and gentle sloping trail was what the majority of the day entailed. Passing by beautiful lakes above the smoke ﬁlled valleys instead of in them was a nice change. I heard they closed the PCT just north of Seiad Valley, so I’ll have to ﬁgure that out soon enough. Saw my seventh Rattlesnake a couple miles from the campground, barely heard it rattle, then thought it was coming from the other direction. They are masters of disguise, I’m just so happy they make noise when I approach. Pretty solid day overall, let’s do it again tomorrow!

Another thirty mile day in the books! The trail was quite tough today actually with lots of elevation change. Rocks all over the trail digging into my feet. I walked from 6:30am to 7:15pm with a 1 hour lunch break in between. My feet are still hurting quite a bit. My left one is doing much better, but the right one is quite sore on the heel still. I’m sure thirty mile day’s aren’t helping much. Good news though, another hiker said he spoke to a ﬁreﬁghter and the PCT isn’t closed up ahead due to the Klamathon Fire. Yesssss!!! Heading into Etna in the morning, should get some more info there.

Didn’t sleep very well last night, not sure why. Quick hike this morning over more sharp rocks. Deﬁnitely bruised my left heel. Got into a staring contest with a deer on the way down to the road. I got a ride into Etna from Jim, a kind local in a white truck who happened to be dropping off some other hikers. Brunch at Wildwood crossing, the loaded breakfast burrito was definitely a winner! Went and watched the France vs. Belgium match. 1-0 France won it and they are headed to the World Cup Final. On the way to resupply at Dollar General a local pulled up in his lifted black Chevy truck and handed Peck and I two ice pops, delicious! After the always fantastic resupply at DG we drank beers at Etna’s awesome city park with free WiFi, met “Poppin”, and stayed up way too late. England vs. Croatia tomorrow at 11am then back to the trail with some town food! 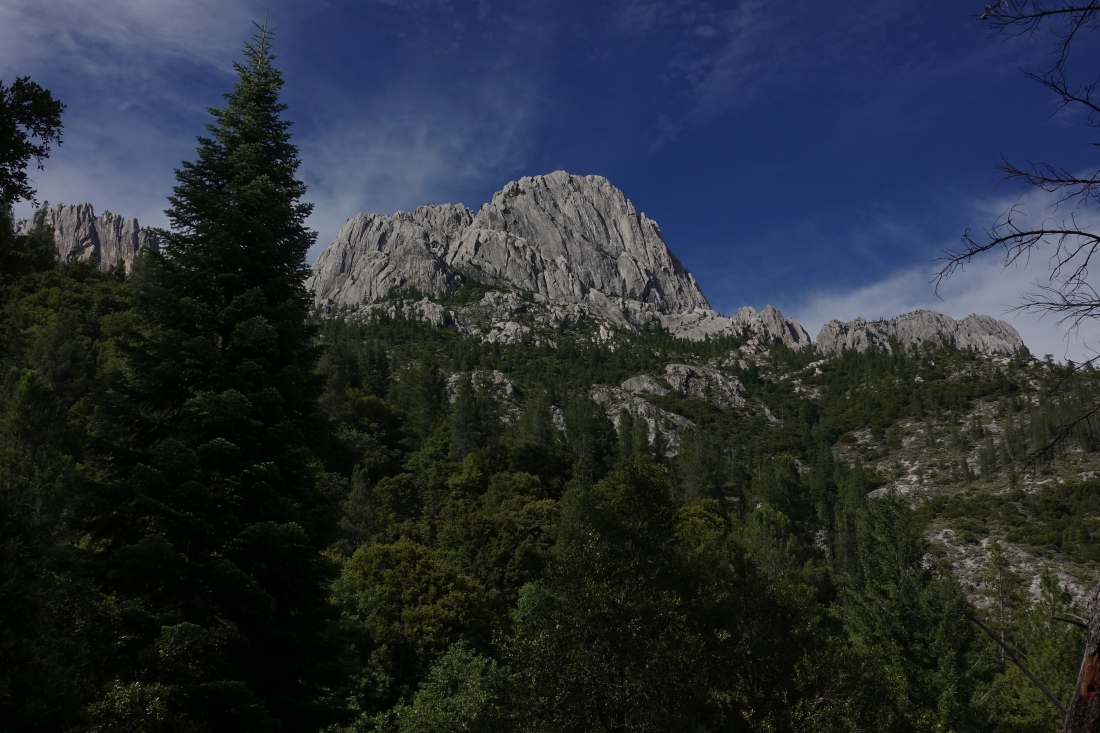 Very craggy if I do say so myself!

NorCal in the summer is really something to behold

Overlooking the valley where Etna, CA is located

Here’s a link to next week’s journal!