Throughout last night I could hear coyotes howling and barking which, coupled with the howling wind put off an uncomfortable feeling. This morning was truly gorgeous though. It was partly cloudy until around 11am which kept it nice and cool. I saw two Jackrabbits darting off amidst the chaparral. I can tell the trail is really beginning to change. Lots of uphill today, more than the past couple of weeks. I actually met “Uphill” the hiker, going downhill. He is doing a little ﬂip ﬂop he said. I suppose to get around the snow in the Sierra. Once again it got really windy in the afternoon as I was passing another wind farm. Go figure. Luckily camp tonight is near a massive Oak tree that provides ample cover from the wind. There are a couple other hikers that sought shelter in the same location named “Flowers”, “Enigma”, “G”, and “Alias”. Today was stellar overall. All of the flowers blossoming are really mindblowing. They showcase the diversity of this vast desert.

I think I stayed in Tehachapi a little too long. Although, I did get a quick ride into town due to Camo’s Facebook acquaintance who knew him through hunting. Once we got into town Camo, Squeeks, G, and myself all had breakfast at Henry’s Diner which was delicious. Then I resupplied and walked over to the Dog House Saloon for a beer and to charge my devices. I might as well enjoy the downtime while they charge right?! A local patron named Les who was originally from The Netherlands bought my first round. Les and his bar mate were happy listening to my stories from the trail in exchange for a tall IPA. Cheers Les! After leaving the Saloon I quickly found a hitch from another local named “Trip” who had picked up a couple other hikers as well but was taking them to the hotel. In the heat of the afternoon I hiked past yet another wind farm and Highway 58 leading into Tehachapi. Hiking alongside 58 I was jamming to music and got a Semi Truck to honk it’s horn for me! Up a steep hill I went, overlooking the road and desert leading to Lancaster and Edwards Air Force Base. Once at the top I reached a campsite amongst the Juniper bushes. Again it’s a bit windy tonight, but it’s extremely clear so the stars should be magniﬁcent. There is a lot of military air traffic through the valley which is pretty great for plane watching.

Saw a really good meteor last night as well as a couple satellites before passing out around 10pm. With how close we were to Edwards AFB I ﬁgured I might see some cool stuff (UFO’s!) but unfortunately not. I slept really well though, and the sunrise was just gorgeous. Hiking with the cool morning breeze was very pleasant as I made my way over to Golden Oaks Spring which held a broken pipe and a trickling stream of water. Luckily I met some PCTA volunteers named Lucy and John who were working hard to ﬁx it and had brought fresh water with them. Thanks guys! “Midas” the border collie on the other hand… you receive no thanks for almost stealing my whole tuna wrap. After lunch at the spring I walked through another large burned area. Not much to say other than it was pretty barren and hot. My tentsite tonight is pretty sweet though. Hopefully the stars will be nice and clear. There’s just something so calming about staring up at the milky way before going to sleep.

What a pleasant day of hiking. There were loads of wildﬂowers blooming once again. Really happy that I get to smell them without sneezing. Alpine Lupines are beginning to arrive signaling the start of spring, and higher elevations to come. Walking through giant Ponderosa Pines all morning was a highlight of the day and conversely kept me nice and cool. I could feel myself becoming dehydrated before arriving at Robin Bird Spring. Unfortunately, where I planned on camping tonight is another ten miles further and doesn’t boast a water source. I deﬁnitely don’t enjoy dry camping. I think I got a few good photos today which is always nice to look at while getting ready for bed. Long water carries and no cell service sum up this place pretty well so far. This desert is the definition of “beauty” personified.

The water at McIver’s Spring smells like farts and doesn’t taste any better. Like the water at the base I used to work at in Denali, Alaska but with more sulfur. Other than that though the day went by swimmingly. It began with a little trail magic (Sierra Nevada Pale Ale and Nacho Cheese Doritos!) at a dirt road crossing. It got really hot in the middle of the day as the sun burned off the morning cloud layer. Conveniently it cleared up right when I decided to go up the steepest bit of today’s hike just after lunch, at 1pm, man I’m smart. The ﬂowers are going gangbusters right now which is just breathtakingly beautiful. There was barely anyone on trail today, but I did meet “Fossil” and Karen at camp. Fossil knows Cruise Control (Mom), apparently she gave him a beer near Wrightwood. Biggest mileage day yet! Unfortunately my left Achilles is acting up so I’m happy to sleep in a bit and mosey on in to Lake Isabella in the morning.

Nearo day. Cruisey trail downhill to Walker Pass. At the campground before the road to Lake Isabella I met Nancy and Mike (“Big Bear”) at their camper right off the trail. They were doing some trail magic which was much appreciated. Ham Sandwich was amazing! After the sandwich Big Bear drove “OJ” and I down to the RV Park at Lake Isabella in his super cool little Suzuki Samurai. What a nice guy! I did a small resupply, then we had burgers and played a few games of pool at a dive bar called “Shady Lane” which was fun. I drank too much PBR and Rum. Good times.

Late start today due to having issues with my New Zealand bank account and fraudulent charges. It makes it difficult to contact them and figure out what happened when I’m on the other side of the world! Hopefully I get the $400 put back into my account. On the way out of town I got 3 separate hitches to get back to Walker Pass. Crazy, but fun. The trail today was hot, but well graded. Fairly easy going considering it was around 2000 feet up and back down to the spring. Tomorrow will be a full hiking day. Should be just about 20 miles, then another 18 miles the next day before I’m into Kennedy Meadows South and the official start of the Sierra!

This landscape is so crazy! 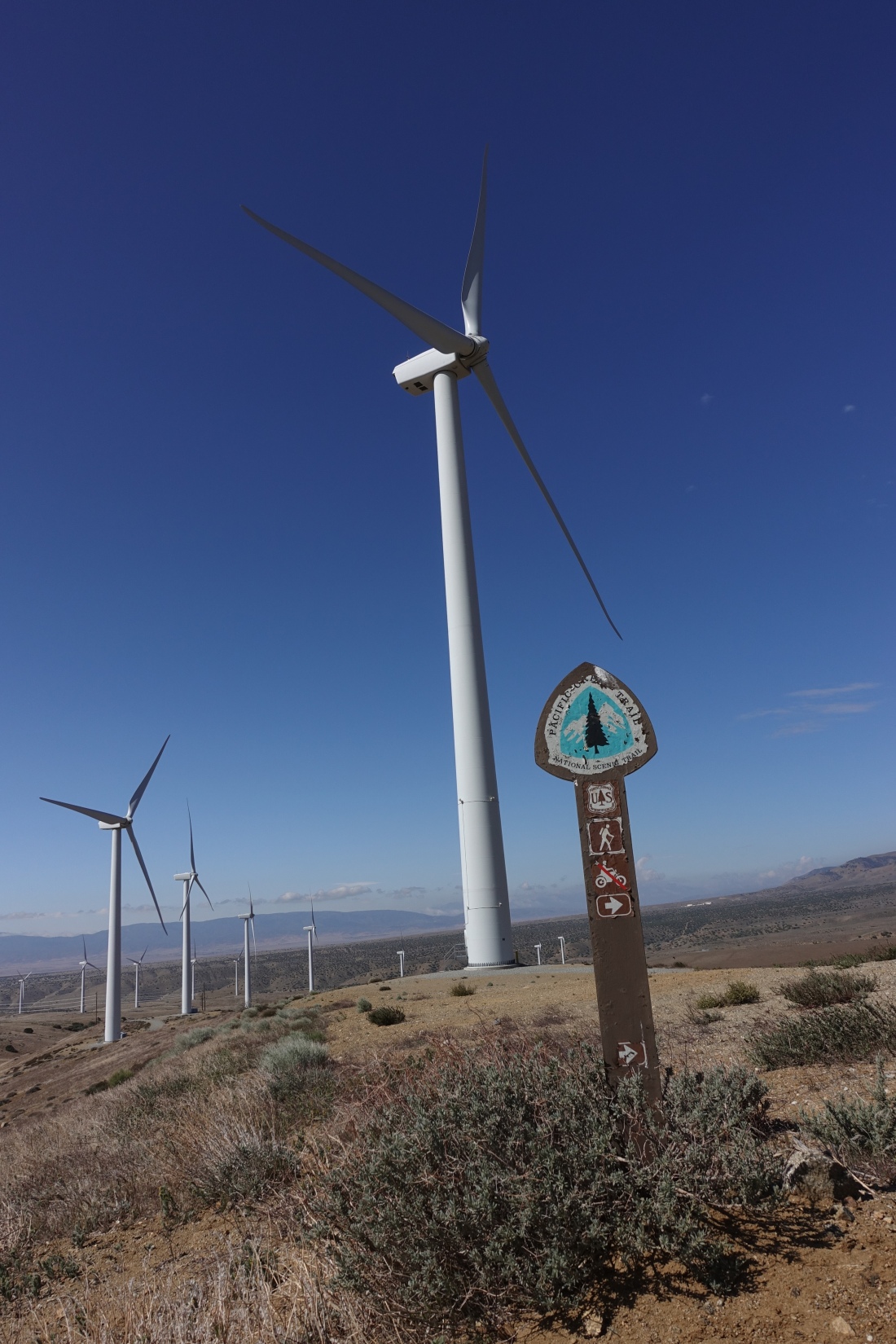 Blue skies and high winds 90% of the time 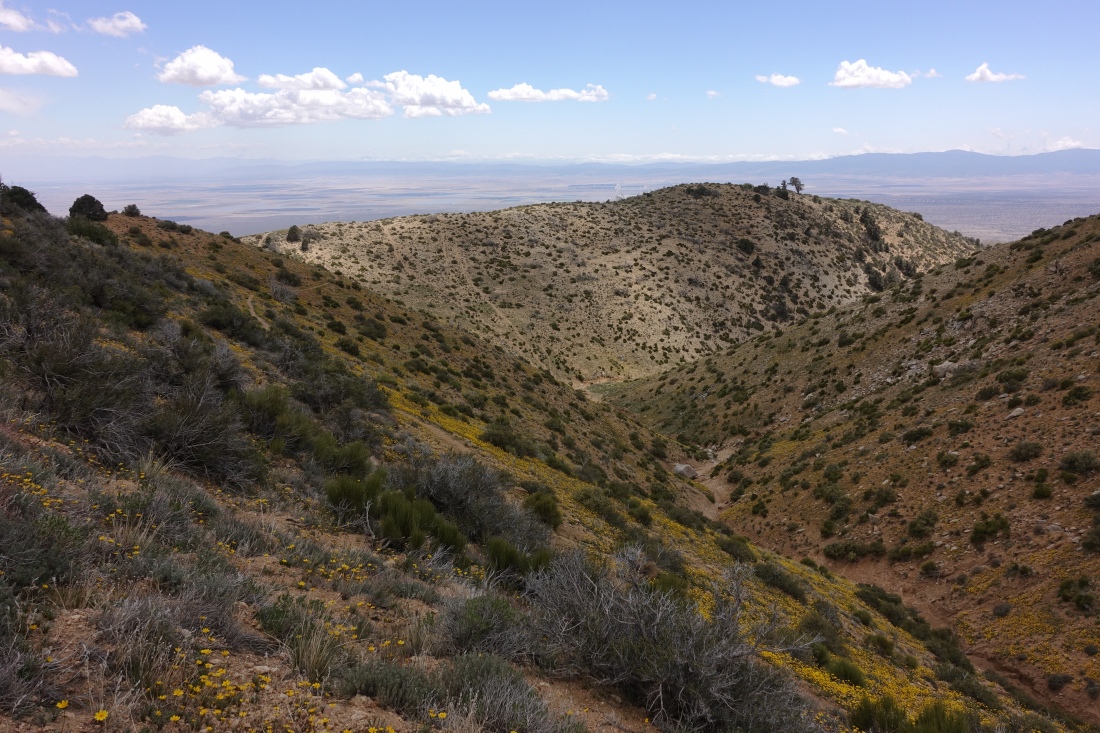 The flowers and views go on forever 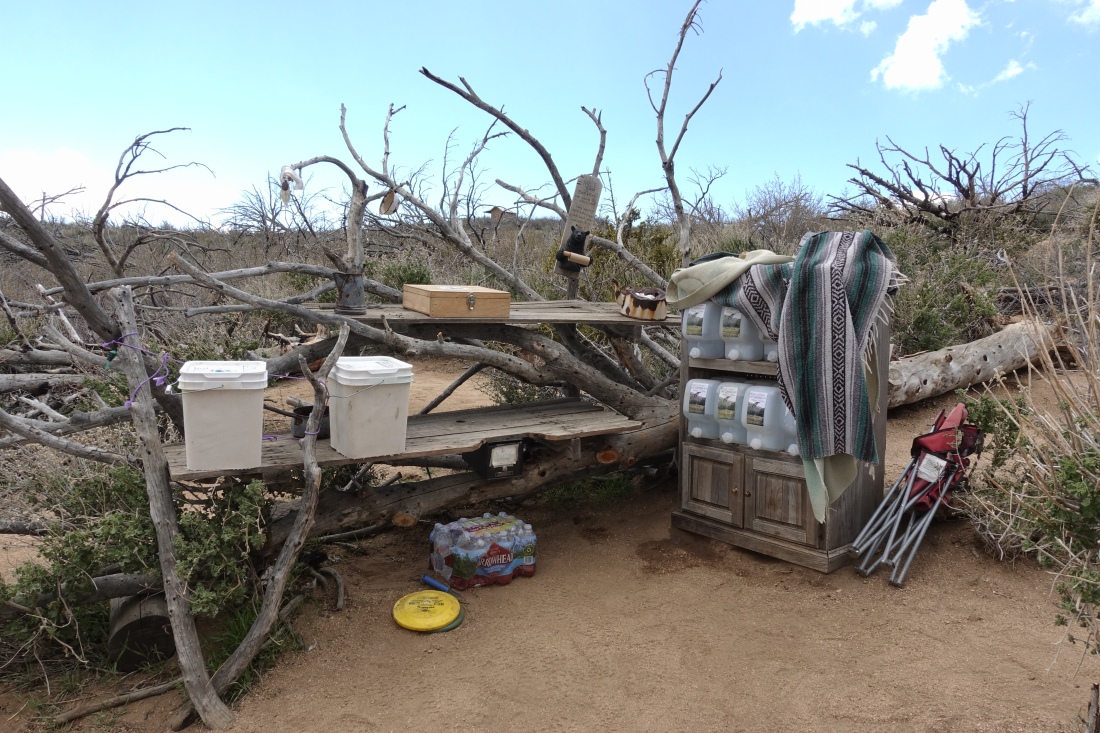 Wonderful Trail Magic right when you need it most 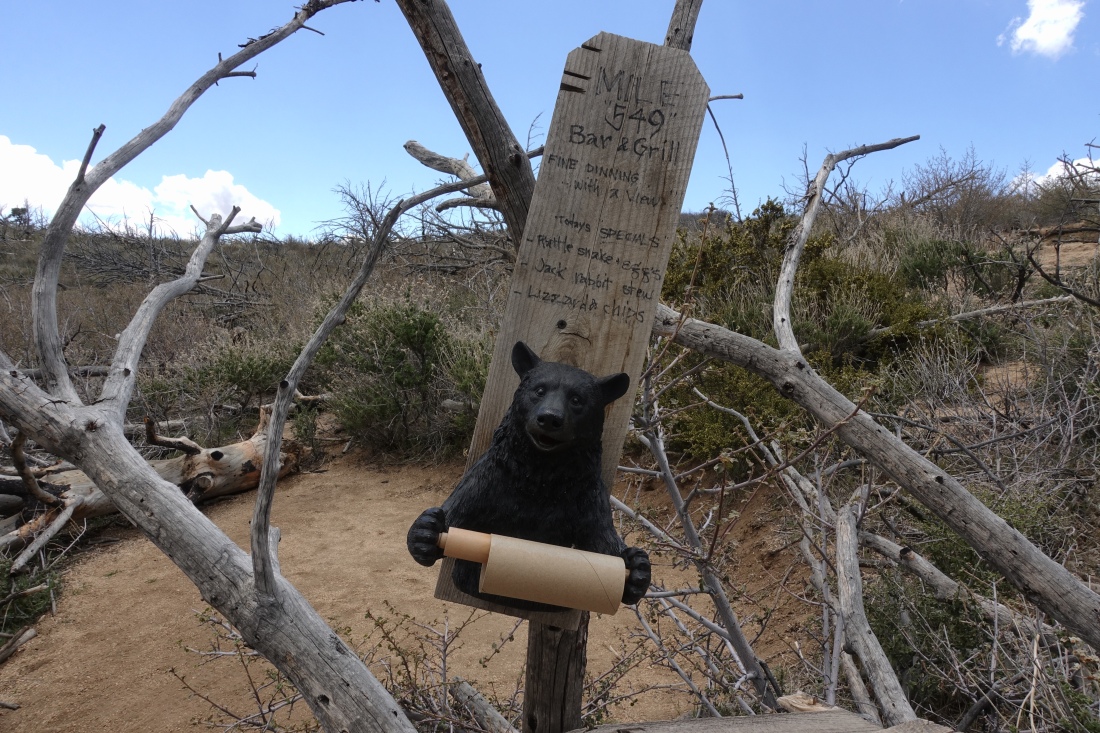 Unfortunately the grill was closed (and out of T.P.)

One of the most unique log books on trail 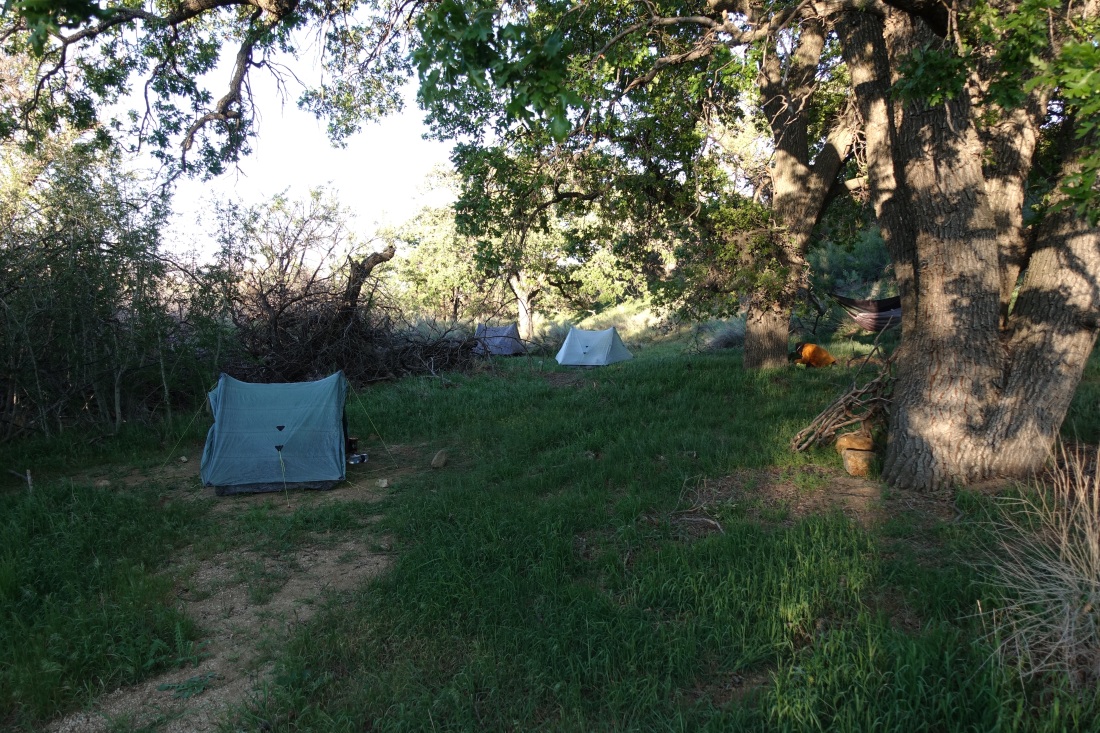 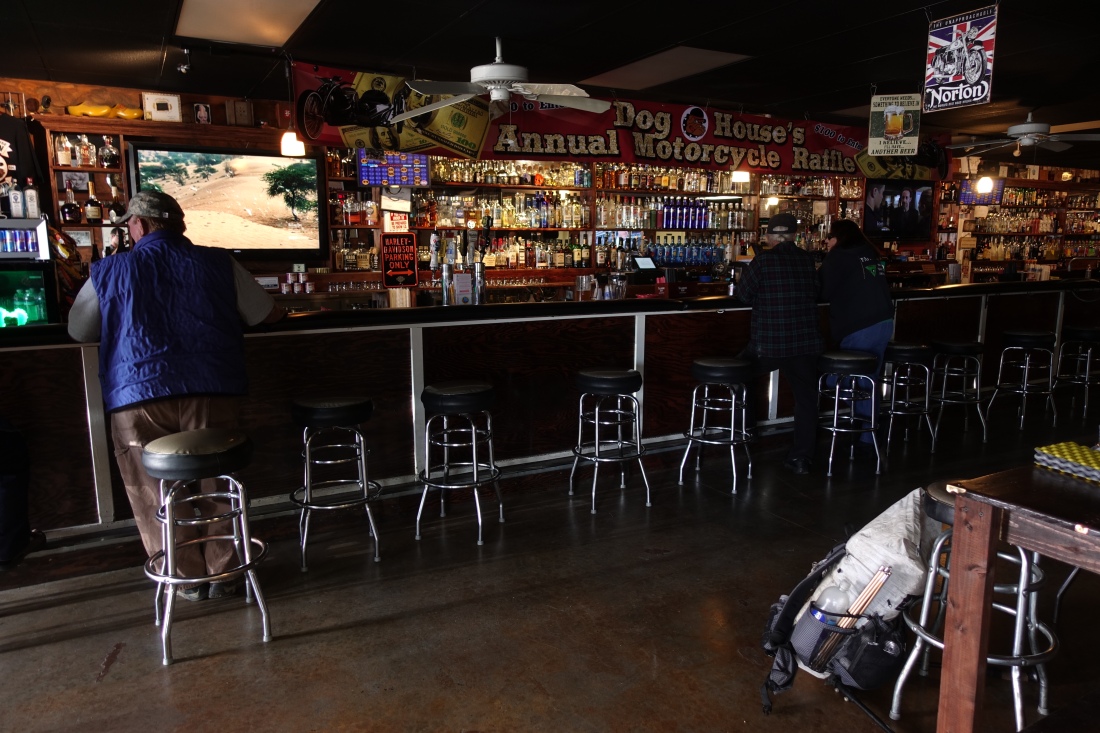 Dog House Saloon (Les is in the middle)

Nestled amongst the Juniper 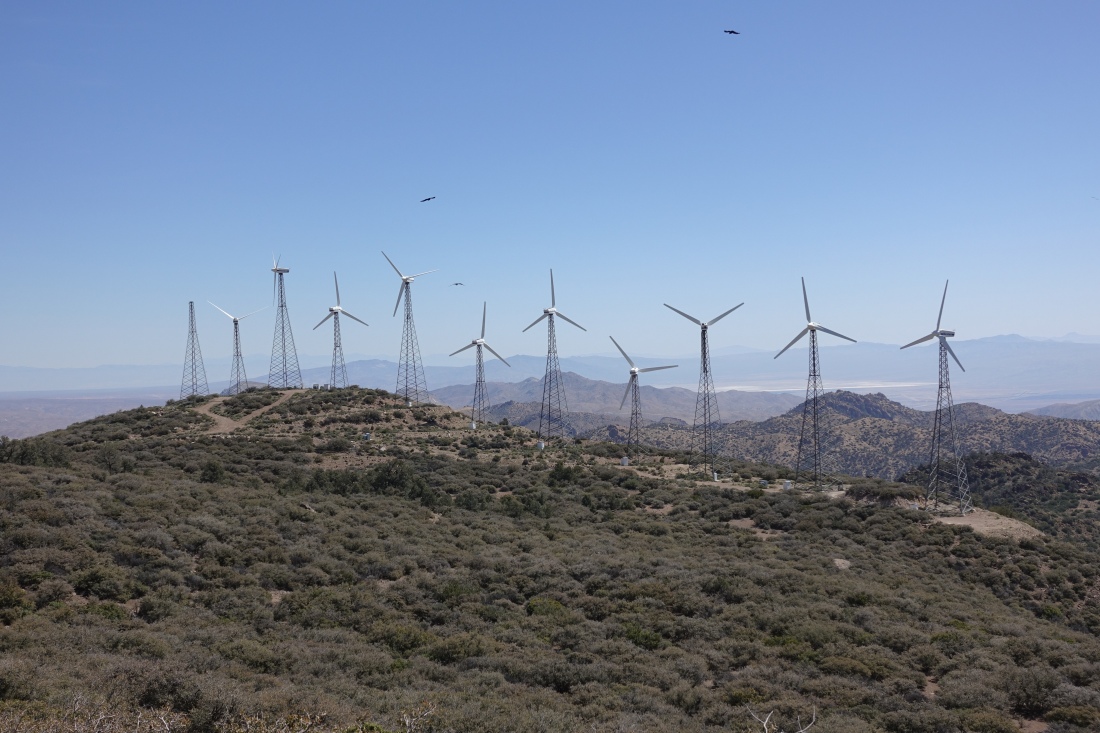 Chilling and enjoying the scenery 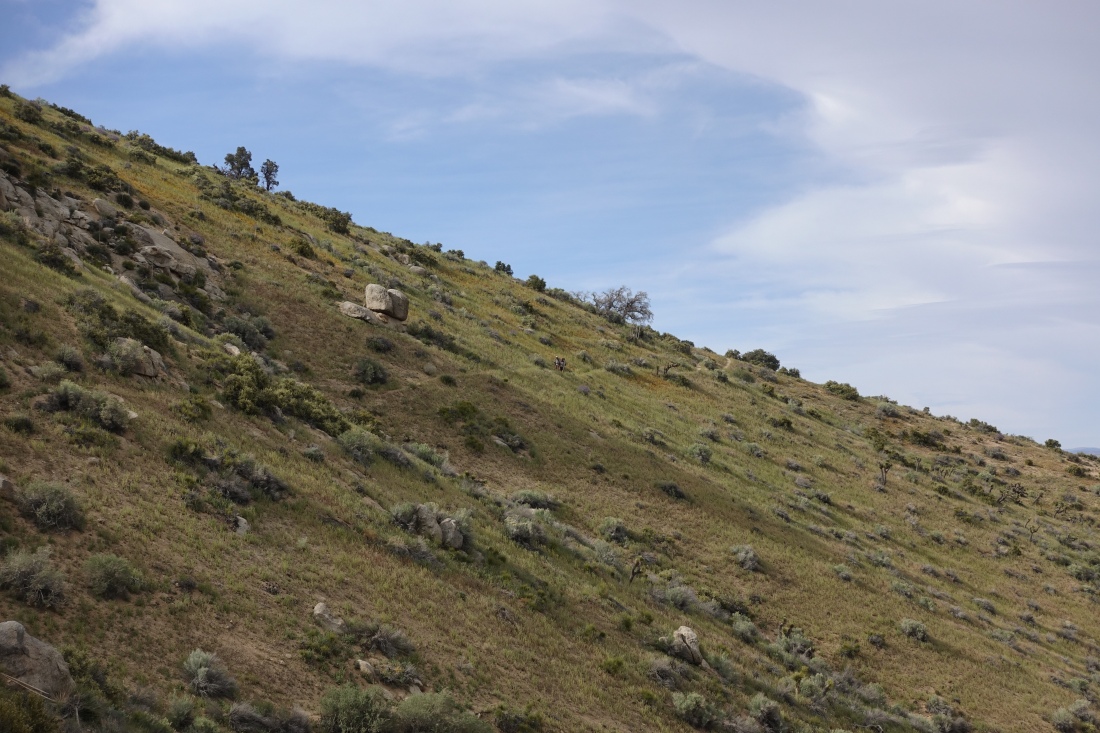 Unidentified hikers showing the scale of this place 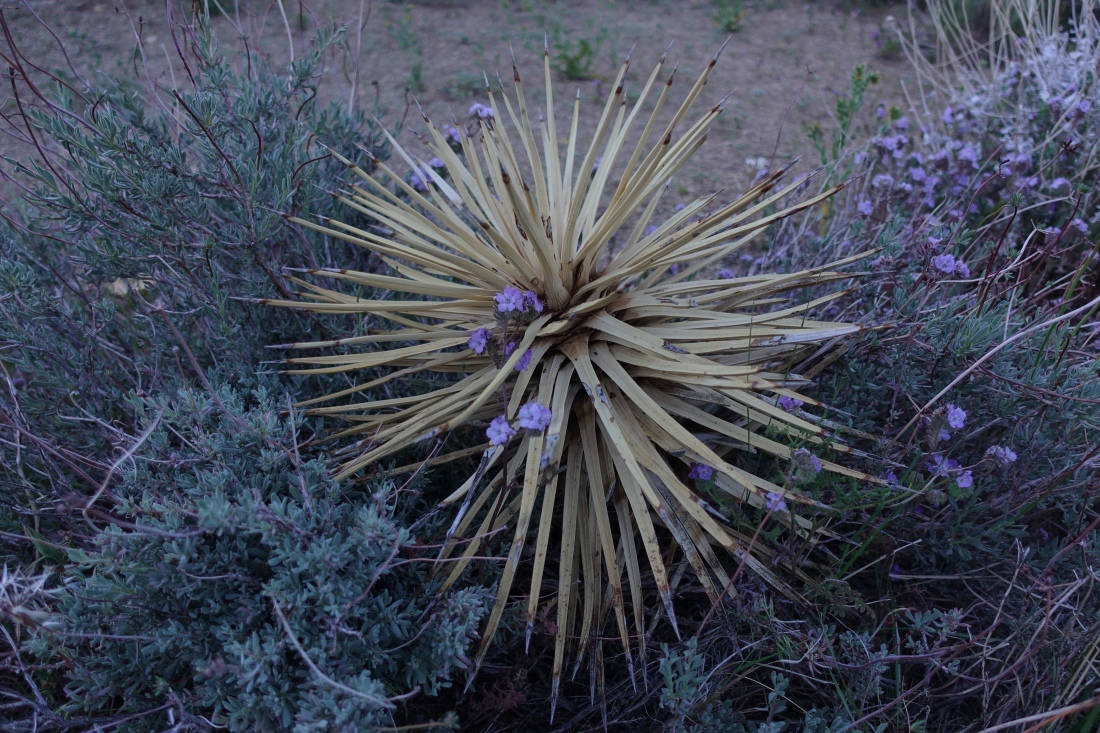 The desert is life and death 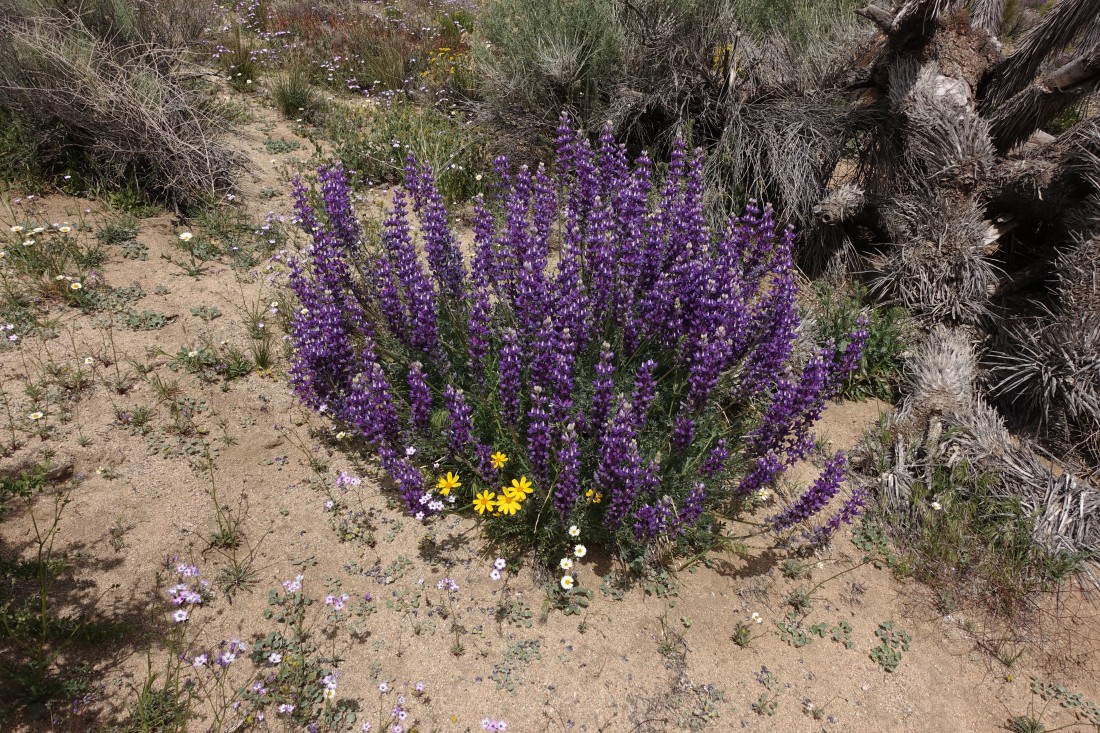 A derelict bus down in a ravine

This section of Joshua Trees was super cool, but provided little shade 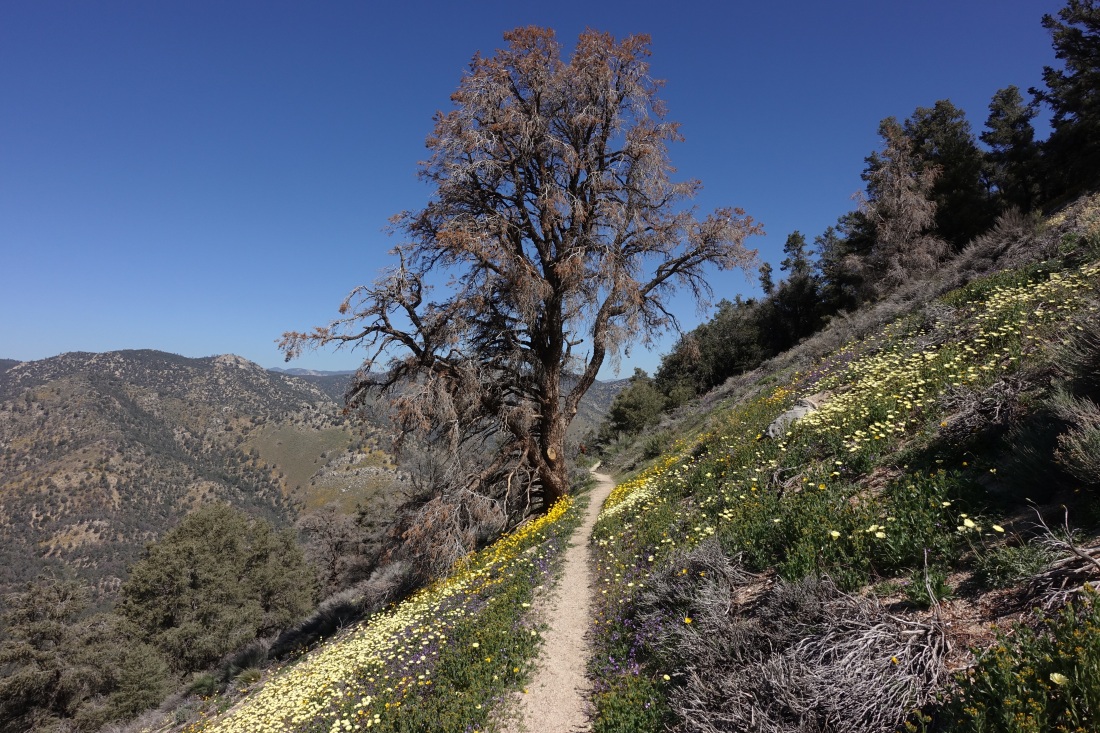 This is my favorite photo of this section

Ridge after ridge of beauty