Woke up at 4:45am, packed everything up and started walking just after 5am. Three stream crossings and roughly thirteen miles later I was sitting at the base of Forester Pass. The highest point on the PCT. Attempting to hide from the wind behind a boulder, I ate my tuna wrap and boiled some snow for water. I was boiling snow because I’m an idiot and forgot to get water from the numerous flowing streams before everything became frozen at the higher elevations. During lunch I tried my best to dry out my shoes and socks before beginning the ascent towards the infamous pass. Good snow conditions made it quite reasonable up until the fabled traverse just below the pass itself. My heart was racing, adrenaline flowing, I felt incredible. Making it to the other side and looking back down at the crew was a sight that I won’t soon forget. Gorgeous views from over 13,000 feet while I stared down the north side of the pass covered in snowfields as far as I could see. Since it was early afternoon by this point the snow had softened and I began postholing my way down to lower elevations and a promise of campsites with fire pits. I made it down to the valley ﬁrst and immediately got a fire going to dry socks and shoes, as well as attempt to warm up. I irreparably burned one of my shoes. Oh well. Today was definitely the highlight of the trip so far. I can’t believe I’ve made it this far!

Wonderful start to the morning. Leaving camp at 6:45am and immediately I was greeted by the crisp, alpine views of the Sierra. The mountains here are really spectacular in their steepness, shape, and accessibility. It’s astonishing to think that every peak in this vast range has been climbed/summited… some well over a hundred years ago. The climb out of Vidette Meadows was steep as I made my way up to the Kearsarge Pass trail. Walking over frozen ground, looking out across frozen Bullfrog Lake and over what I thought was Kearsarge Pass, I kept checking my map and thinking that it couldn’t possibly be that far away. Luckily I had been staring at another pass leading to University Peak. Kearsarge was just around the corner! I couldn’t have asked for a better morning to meet up with my good friend Josh. He was absolutely right about Kearsarge being one of the best hikes in the area. There are an abundance of beautiful alpine lakes dotting the mountains up here. Descending from the pass I was stopped by a Park Ranger and asked to show my PCT permit and bear can (first time I was checked). A little ways after meeting the Ranger I found the perfect place for a glissade down a big snow slope. I quickly got a ride to Bishop due to a fellow hiker named “Fireman” who had arranged for his girlfriend to come pick him up. First stop was Subway for some much needed sustenance, then it was off to the “Hostel California“. Best hostel on the PCT so far! Steak and Potatoes for dinner cooked by head chef MC Camel plus a couple cold beers ended the night just right.

Josh came to pick me up at the hostel around 7am. We drove north on 395 and stopped for breakfast at “Tom’s Place” up above Bishop. Fantastic food and awesome history at that place! If only we had some poles we could’ve gone trout fishing as well. After breakfast I got my resupply done at Smart and Final/Vons before heading to the ancient Bristlecone Pine Forest. It was a great view of the Sierra from the other side of the valley. Located within the “Methuselah Grove” is the oldest living organism on the planet. We didn’t chance upon the 5,068 year old tree, but we saw numerous others that were around 3,000 years old. It’s astonishing that they can survive in that harsh climate above 10,000 feet. On the way down we met “Mango” from Nelson, New Zealand and gave her a ride back to Bishop. For lunch we went to Macka’s (McDonald’s) then spent the afternoon chilling and relaxing at the Mt. Williamson Motel with a few more beers and playoff hockey on the TV. Backing up photos from my phone is taking ages. I gotta do it though.

To start the morning we went for Carl’s Jr. egg burritos then drove south past Lone Pine and up the steep and windy road to Horseshoe Meadows. We hiked around for a bit, across streams full of Golden Trout. Really pretty spot. I didn’t realize how close to the PCT it actually is. Fun morning walking around and catching up. It started snowing a bit on the walk back. Good thing we turned around too because Josh left his window open! We went to the Independence museum after lunch and man that place is cool. Coyote dentures were the highlight for sure. Some more booze and playoff basketball in the afternoon ﬁnished it off nicely. I finally got my photos all backed up and shared with the crew. Now I can fill my phone up with even more!

Well today was tough going to say the least. It started off perfect with more Carl’s Jr. followed by a wonderful morning hiking up to Kearsarge Pass once again, this time with a ton of weight (extra food) on my back. I saw a bunch of PCT hikers heading out over the pass that got caught in the storm last night and were not doing so well. Down Bullfrog Lake trail and out on the PCT again I began making my way towards Glen Pass as the weather gradually turned for the worse throughout the afternoon. I had barely made it over the pass before it started snowing. Postholing my way down a steep snow slope with no trail in sight was fun… this has to be the hardest day of hiking I’ve possibly ever done. The distances just seemed so massive. So much work for what amounted to about a 15 mile day. It was very, very, very pretty though. Tonight I’ll try my best to dry everything out next to the fire. Though, I’m sure there will be a river crossing ﬁrst thing in the morning that will soak it all again. “Oats” rolled up to camp around 6pm with “Hummingbird” and “Riﬂe”. Good to see her again. Lightning started popping off around 9:30pm just as I was getting ready to go to bed. Rain began coming down right as I doused the fire and as soon as I entered my tent it started pouring. It’s crazy watching lightning illuminate the tent and then hear thunder clap less than a mile away!

Well, I didn’t make it very far today. The poor weather continued from last night then worsened in the afternoon. Tough going again due to washouts on trail. Luckily there was only one true stream crossing which was nice. I also was able to keep my feet dry for the ﬁrst couple hours. I stopped for an early lunch and to assess the weather moving down the valley. As I sat on a log getting my food ready, snow pellets gradually began to fall. I decided to just pitch my tent and eat lunch inside until it stopped. It didn’t stop. By 2pm it was a full on blizzard. Throughout the afternoon the snow continued to steadily fall as I weighed my options for the next few days. I heard voices around the camp, then a shout asking if I was planning on hiking out that day. It was Hummingbird trying to decide what her course of action would be. I told her I was waiting until 4pm, then if it didn’t stop snowing I was staying at camp and getting up early to continue on. The snow continued, and it went from just Hummingbird and I to having ten people in camp. Tang, Darwin, Oats, “Vicious”, “Rifle”, “Ferrari“, “Street Fighter”, and “King Kong”. They all tried to head out to Bishop via the Sawmill Pass Trail which was a no go. Apparently it began snowing so bad on them they couldn’t even find a trail! Everyone pitched in and gathered ﬁrewood to warm up and attempt to dry things out while it vigorously snowed. Tomorrow I wake up at 4:30am to attempt Pinchot and Mather Passes. Hope I make it!

Well, that sucked. Today was the hardest day of hiking I’ve ever done. From the constant postholing, to the nonexistent trail, it was physically and mentally draining. After nearly two hours of charging my way through snow drifts, some as deep as my waist, Hummingbird caught up and took over breaking the trail. We made it about two miles and 1,000 feet below Pinchot Pass before the whole crew decided cumulatively that it wasn’t a good idea to continue on. It was a tough decision, but the right one. Once we were on the Sawmill Pass Trail it became extraordinarily diﬃcult to ﬁnd good routes without either postholing or losing the trail completely. It took almost three and a half hours to reach the pass, then we dropped another 7,000 feet to the desert floor. Thankfully we got one good glissade out of it! Darwin called ahead as soon as we got phone coverage and had his wife “Snuggles” come pick us all up at the trailhead. Thank you Snuggles! 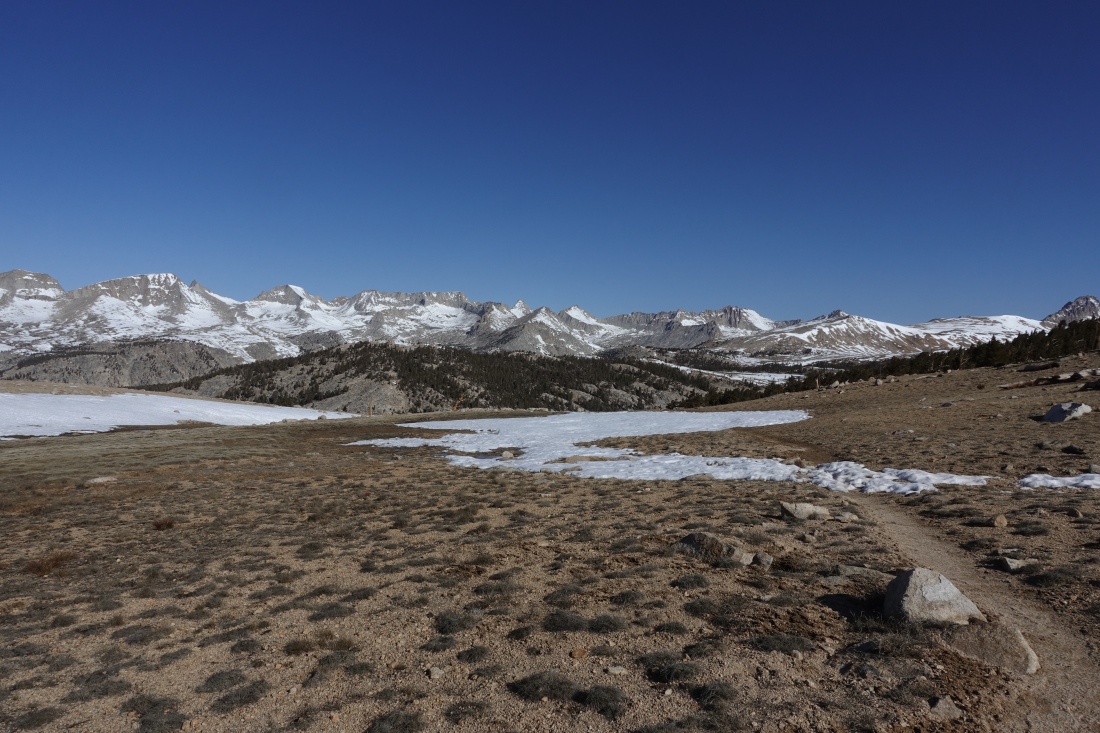 Making my way towards Forester Pass

These mountains were glorious

That was a really long and icy approach

The way they built switch backs out of the rock was so cool!

What a view! (highest point on the PCT) 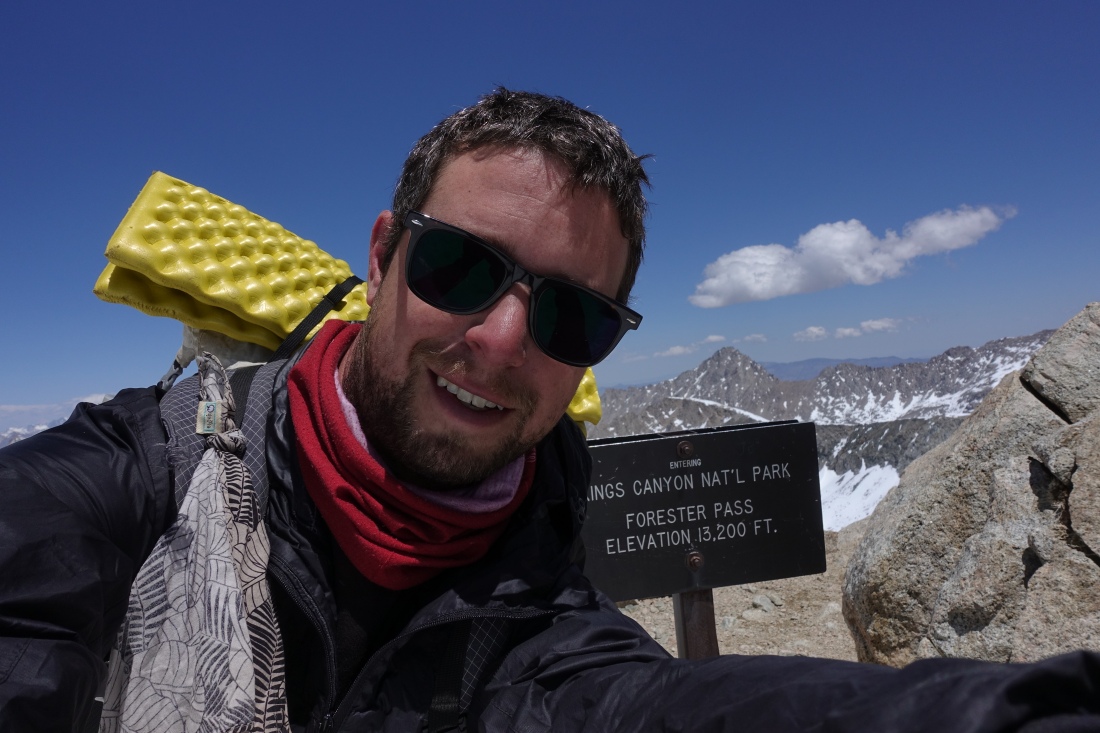 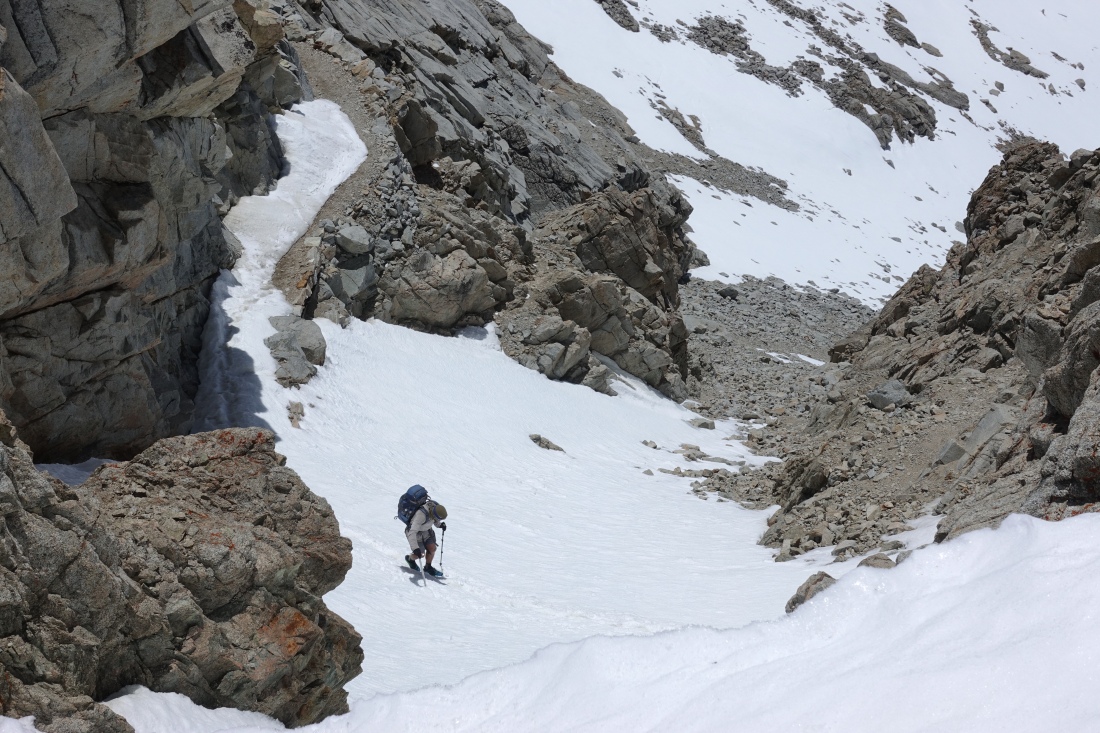 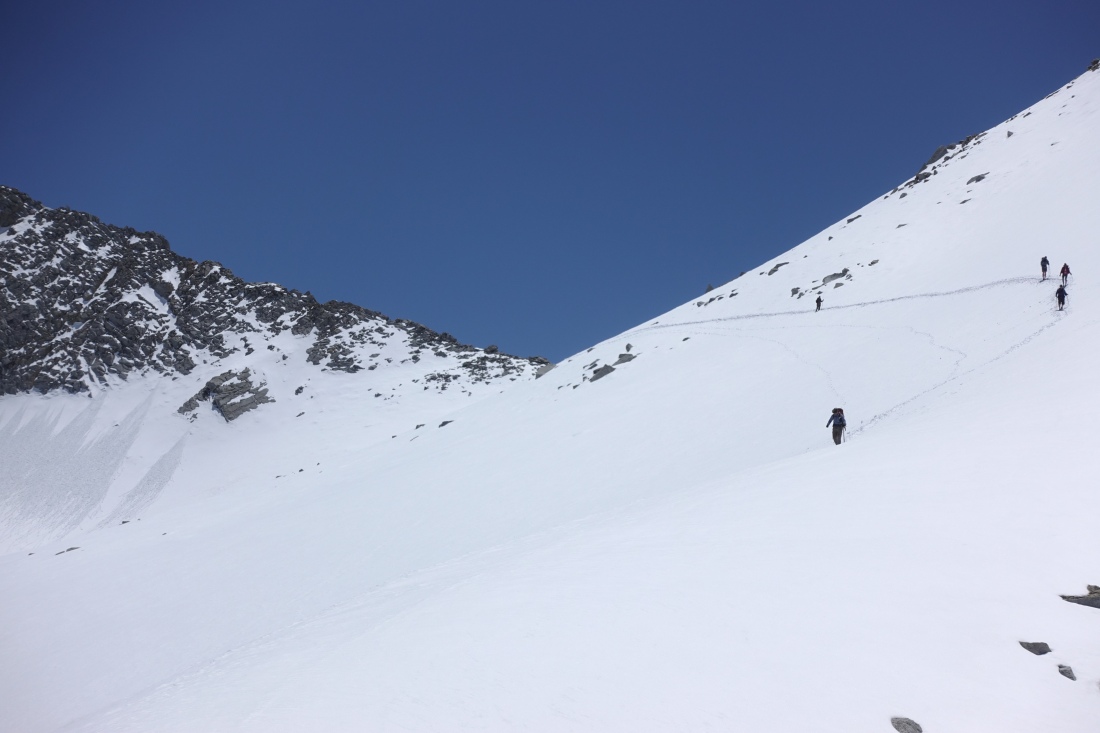 The north side of Forester was pretty snowy

Long ways to go to the valley floor

If only we had skis… 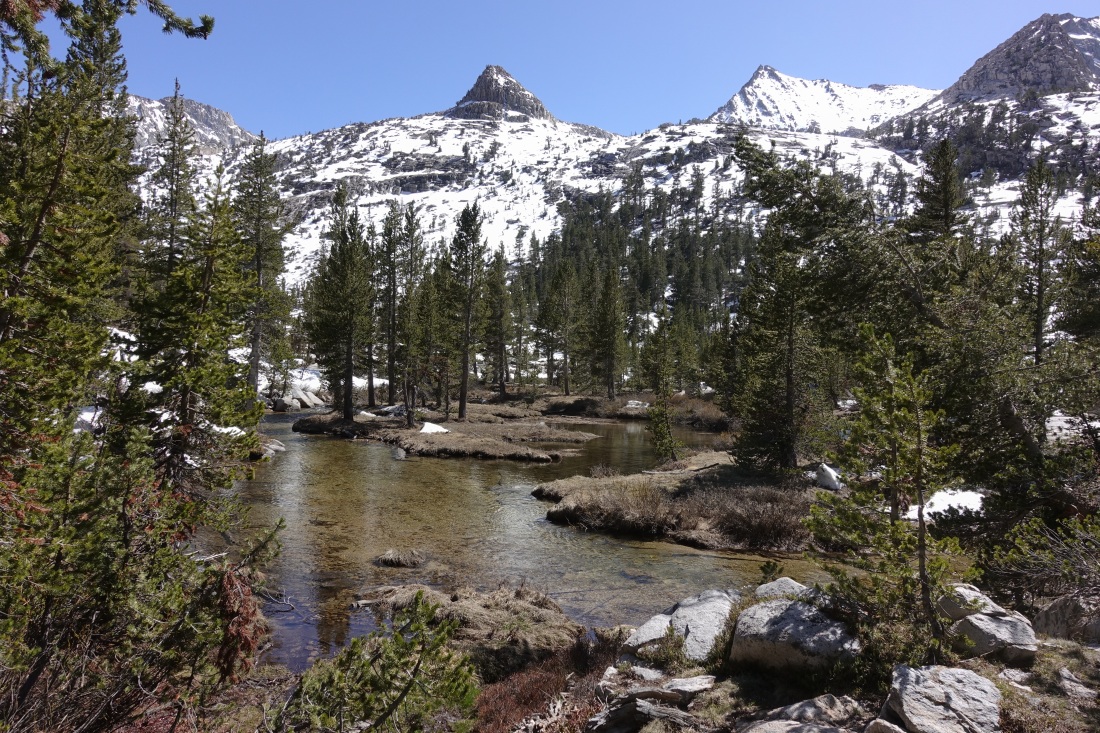 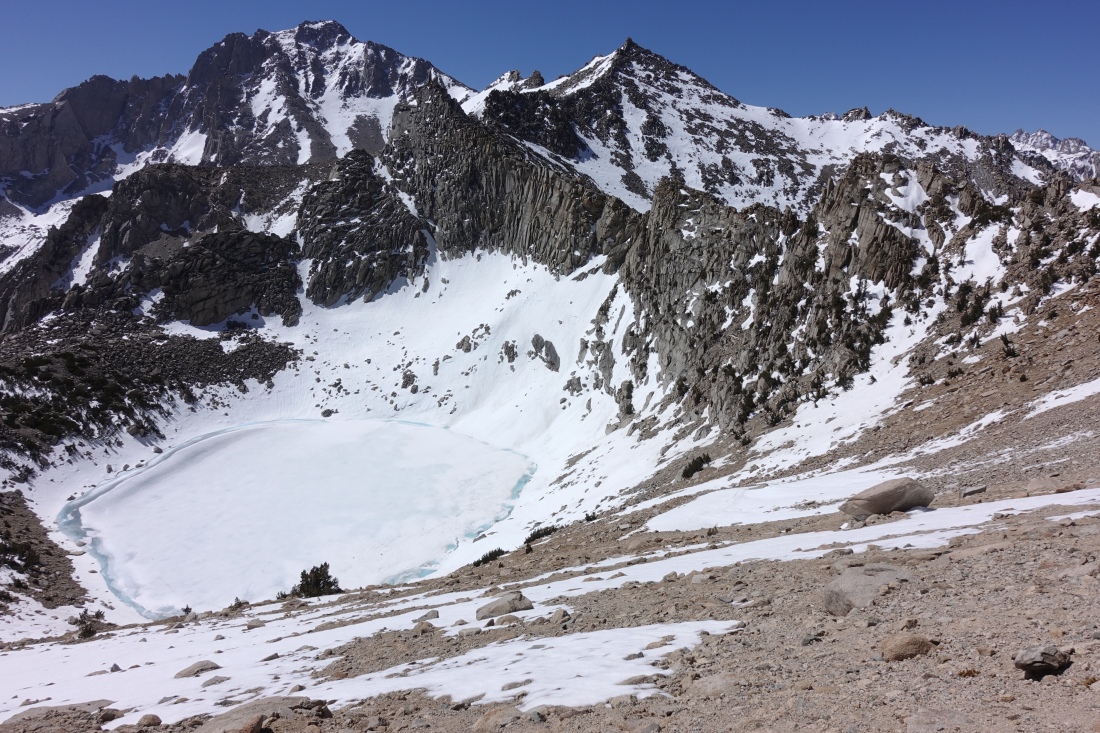 These trees did not look alive…yet they survive 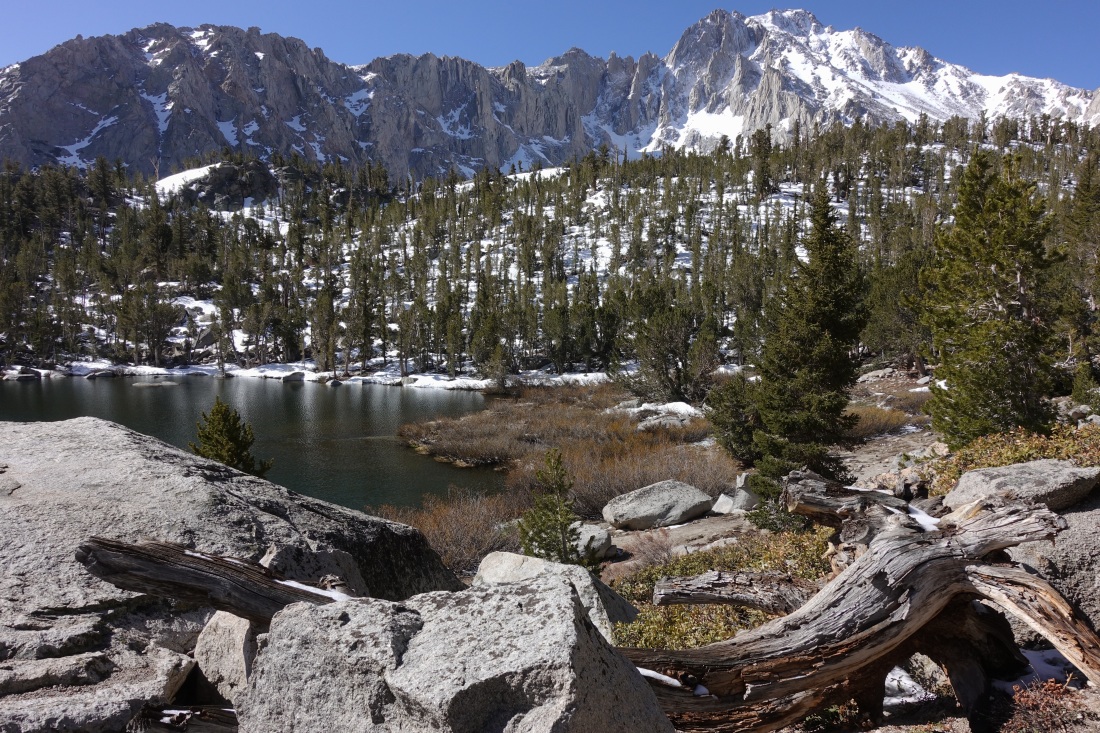 Heading back up Kearsarge 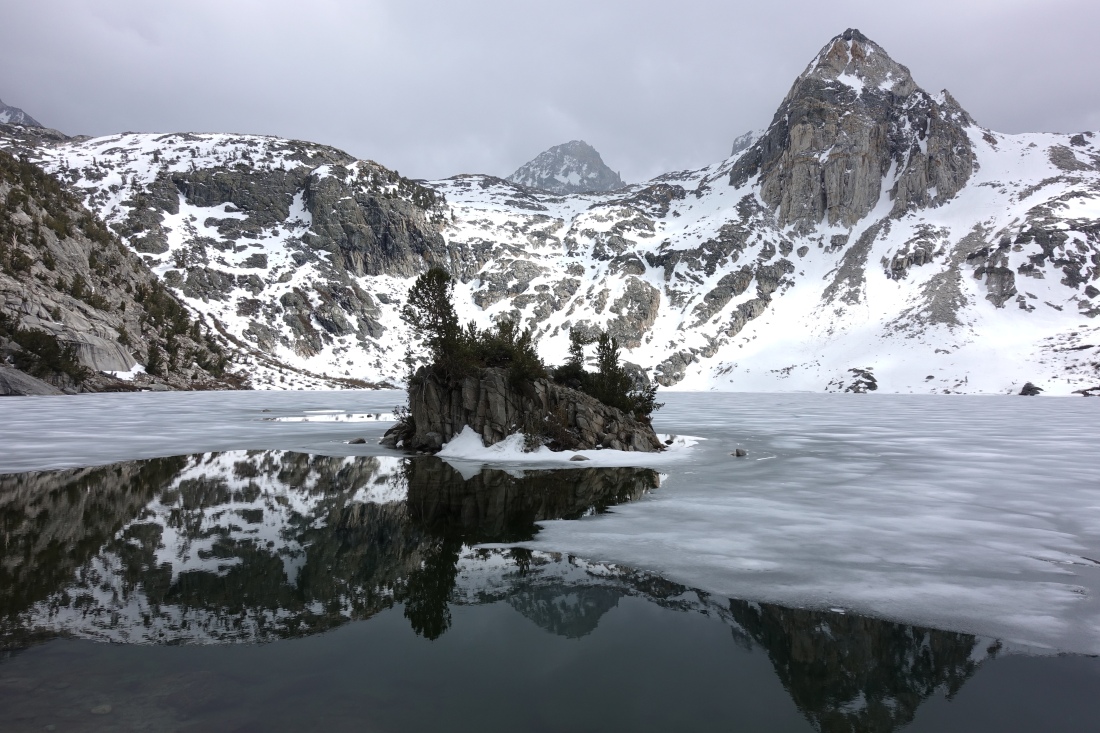 Rae Lakes was frozen, but gorgeous

Trying to stay warm after the blizzard 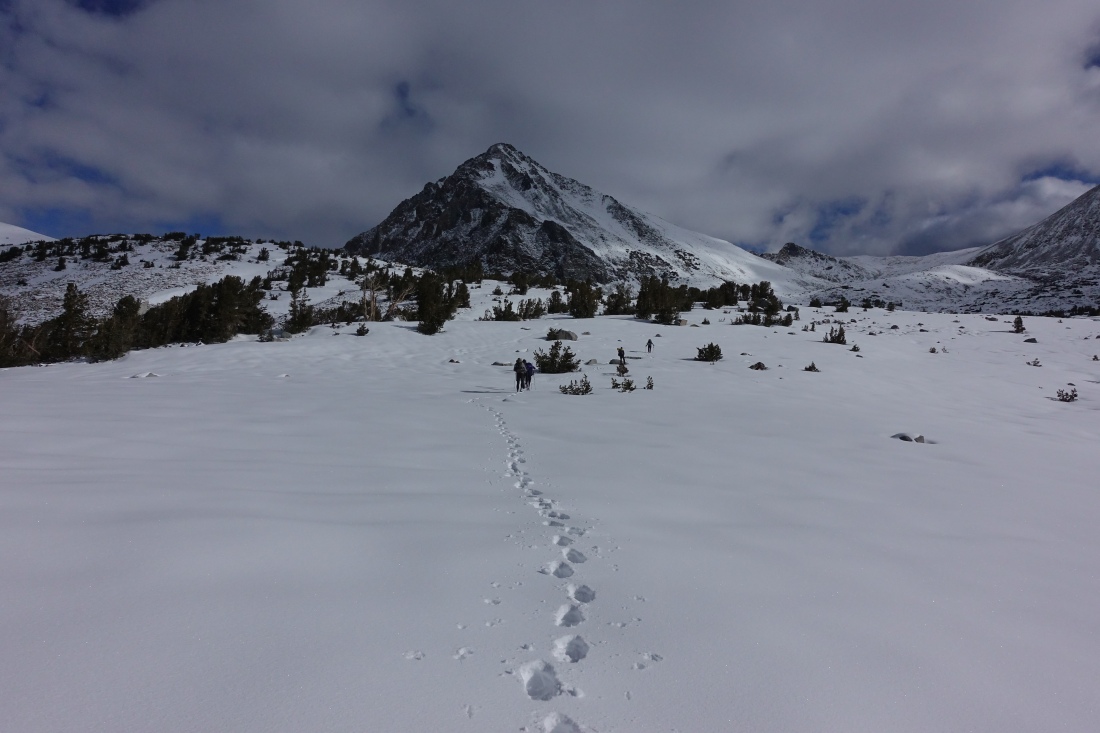 “Where is the trail?”

And crawling through it

Retreat never feels good, but it was the right thing to do 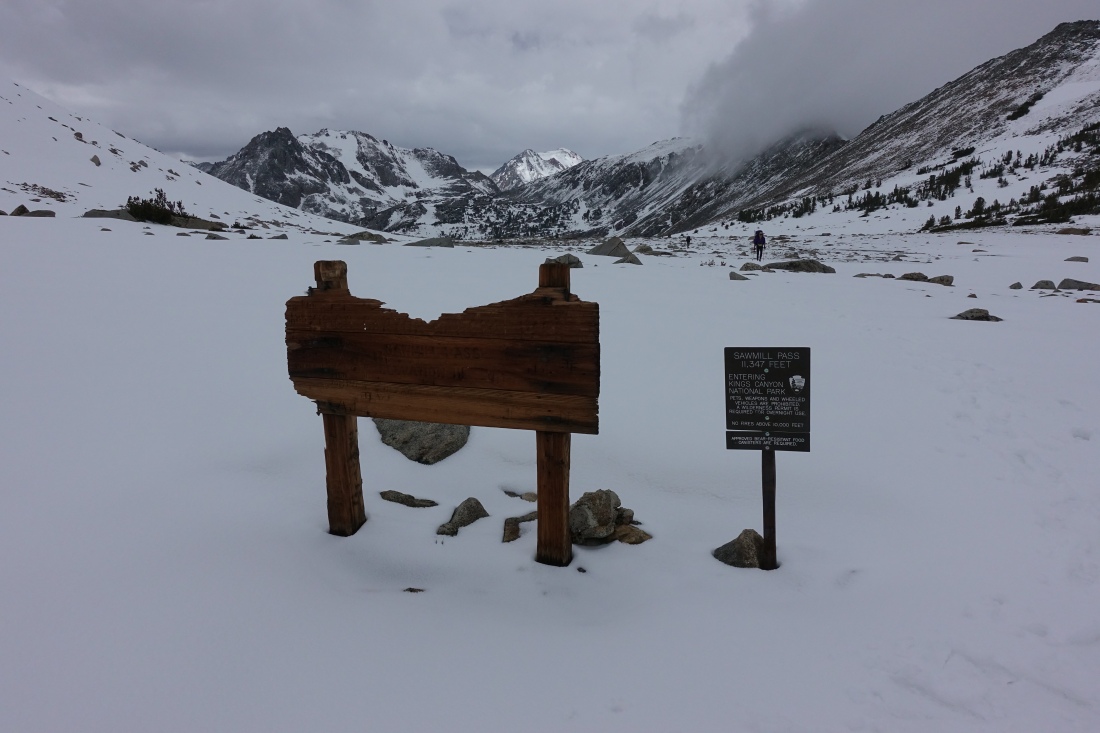 I cannot recommend hiking this pass 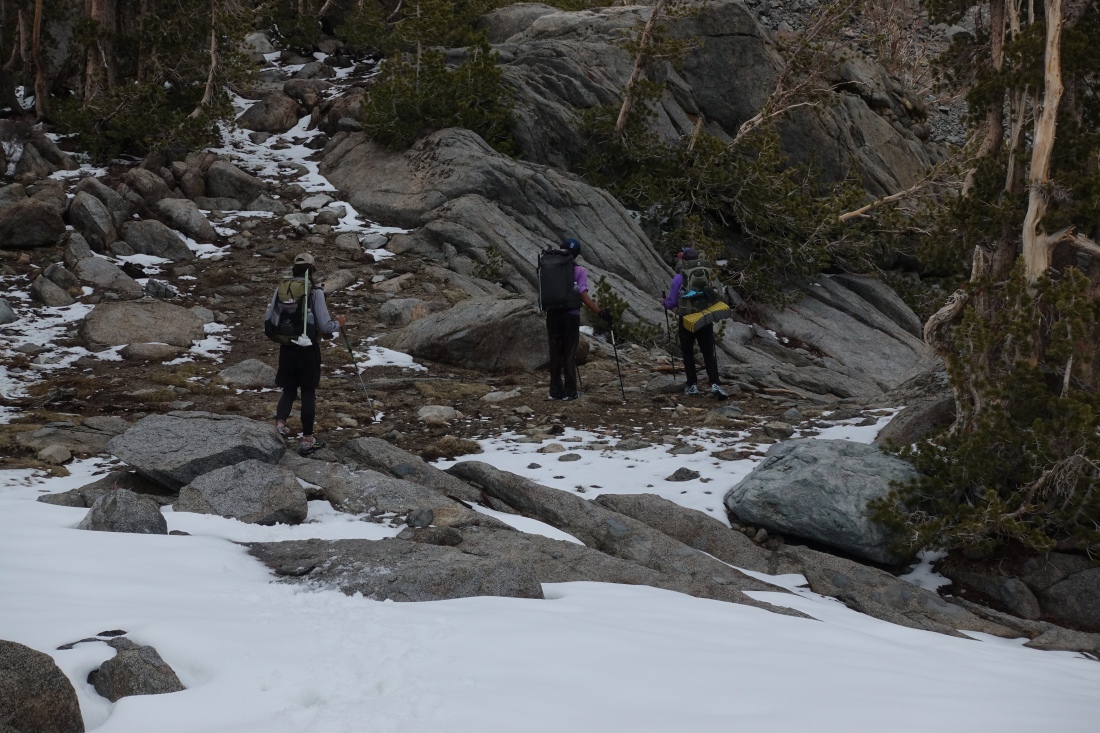 Darwin, Vicious, and Hummingbird searching for the trail

Here’s a link to the next weeks journal!