Really easy trail this morning, not that I’m complaining. I woke up late again because I chose a campsite under trees that didn’t get morning sun, so I didn’t start hiking until just after 8am. Leaving Deep Creek was really pretty with the morning light shining down into the canyon and blossoming ﬂowers everywhere. The copious amount of graﬃti on the rocks did take away from it a bit though. At Hwy 173 I met “Jay-Man” (@nickwenthiking) and “Double Tap” handing out mimosas from Jayman’s Van. What a great way to start the morning. Onward through the undulating hills towards Grass Valley Creek and Silverwood Lake. So many spring ﬂowers in bloom right now that it’s crazy to try and imagine how desolate this place will be in a matter of months. I had some issues with chaﬁng around the west end of the lake, but you can only do so much in the desert heat. Eating pizza at a closed campground with an eccentric Welshman named Union Jack was a pleasant way to finish off the day. Union Jack and I had a nice chat as the sun set on another beautiful day on the PCT. Cool guy, at least that’s what I gathered from the bits of conversation I could understand.

Woke up on time this morning! Pretty cold going at ﬁrst leaving the campground. The clouds were threatening and it started to spit rain on me a bit on the climb out. As I rounded the bend and descended over the small pass the wind really picked up and with how cold it was underneath cloud cover all morning it really felt like it was freezing. I think I changed clothing on 4 occasions trying to be warm without sweating. I never found the magic mixture of base layers and jackets. After passing some really cool sandstone cliffs the wind really started howling. Luckily I was only a few miles from McDonald’s by this point and I couldn’t be bothered about the gusts slamming me in the face as I crossed the ridge line towards Hwy 15. Double bacon cheeseburgers at McDonald’s made everything better. I saw Diggy and Union Jack inside and ate with them. Union Jack and I decided to split a room at the Best Western up the road as I was feeling pretty run down and tired. Tomorrow I head off into the great water-less mountains on the way to Wrightwood and another resupply.

Blaze it! The ﬂowers were so pretty this morning. All different colors, purple, orange, blue, white, red, yellow. Just incredible walking along watching the colors and mountains change around me. The sandstone had some really cool looking features on the way out of Cajon Pass. Not to mention the endless expanse of green hills stretching into the distance. Spring in the desert is definitely the right time to be there. Alas, the wind was there again. The views were phenomenal all day, and even though it was quite breezy it didn’t really get cold until the end of the day. At a random 4 wheel drive crossing on the trail I met Ed and Marilyn where they gave me an 805 beer, Halo orange, and a Danish. Awesome trail magic, thanks guys! Tonight I’m camped at the Guffy Campground. It is quite open and exposed, so I hope the wind dies down soon.

What an awesome day! Woke up to a cool breeze blowing through the campground which made it diﬃcult to get out of my sleeping bag. Once up and going though, the morning was just superb. Walked through the closed down ski resort near Wrightwood, then met my Mom who was dubbed “Cruise Control” at the Inspiration Point Trailhead to hang out for the day and watch her do her magic. Too much fun hanging out with fellow hikers all day. It was a bit breezy through most of the afternoon, but it died off completely as soon as I started hiking up to camp tonight. The views were splendid on the way out, ridge lines as far as the eye could see. Can’t wait to go up Mt. Baden Powell tomorrow!

Woke up on time and got going at 7am. Made it to the Baden-Powell trailhead at 8am and up to the summit at 9:45am, pretty good time! Soo many day hikers today. Met some cool hiker gals on the summit that are part of a group called the six pack of peaks that hike a bunch of major peaks around Los Angeles. After taking the ridge a ways down I came to Throop Peak, which I hiked up. Good views, not as good as Mt. Baden Powell, but beautiful nonetheless. Onward to Little Jimmy Spring Campground where I ate lunch and talked to a couple locals that ended up giving me some strawberries and chocolate! So tasty! Then I continued hiking up toward the summit of Mt. Williamson. That was a steep one. I decided to head up to the peak and make it another trifecta of summits for the day! Going around the endangered Mountain Yellow Frog closure kinda sucked but at least there wasn’t much traﬃc. Angeles Crest Highway is quite narrow in places, so walking 6 miles along it was not the most memorable part of the trail so far. I did get to check out the awesome Buckhorn Campground! Great site for the night with running water as well, what more could a thru hiker ask for? That was a long, hot, but fun day.

What a long, dry day. Not much water to be found along the trail, and tomorrow will be even tougher it seems. The gnats were constantly in my face from early morning onward. But, at least it wasn’t too windy! Tonight I am camped near the Angeles Forest Highway at Mill Creek Picnic Area below the USDA Fire Station. It’s not much for a picnic area, but it’s got toilets and water up at the Fire Station’s parking lot. I got a spot that is sheltered from the wind and pretty tough to see from the road. Today while I hiked through copious amounts of burned area I decided that I want to pursue a career in Wildland Firefighting after ﬁnishing this trail. I don’t really know how I’ll go about doing that yet, but I suppose I have ample amounts of time to figure it out! Tomorrow is gonna be another long one it seems, so hopefully I can get some good rest.

Today was interesting for sure. Walking through even more burned forest solidiﬁed that I want to learn all I can about how wild ﬁres work and how they are controlled. I deﬁnitely got into a solid groove after lunch and was cruising miles which felt great. My feet are feeling pretty beat up though now, my heels are the worst for sure. Can’t wait to get a new pair of shoes next week. Today started off fantastically with some trail magic Ham and Cheese sandwiches, Oatmeal Cookie, and Cat’s Away IPA. Thanks dude sleeping in your car! Luckily I ran out of water last night while camping down below the Fire Station, otherwise I wouldn’t have walked up here and seen this awesome trail magic. I stopped for lunch at a Ranger Station right off the trail which had a big cooler full of sodas and snacks for sale. I bought a Sunkist Orange Soda for $1, and man it was so good. After the soda I saw four Racer Snakes, two Horned Lizards, and innumerable Fence Lizards. This part of the desert is chock full of reptiles! On the descent down into the valley where Acton and the KOA Campground are located I got some stellar views of the south side of Vasquez Rocks. The sandstone formations were really striking in the evening light with huge round stones that seem to be barely attached to the cliff side. I was excited to check out the KOA and their Jacuzzi, but upon my arrival I found it to be empty and unusable. Oh well, I’ll just camp for free down by the river I suppose. Should be a nice and easy 10 mile day tomorrow. Not gonna rush it. 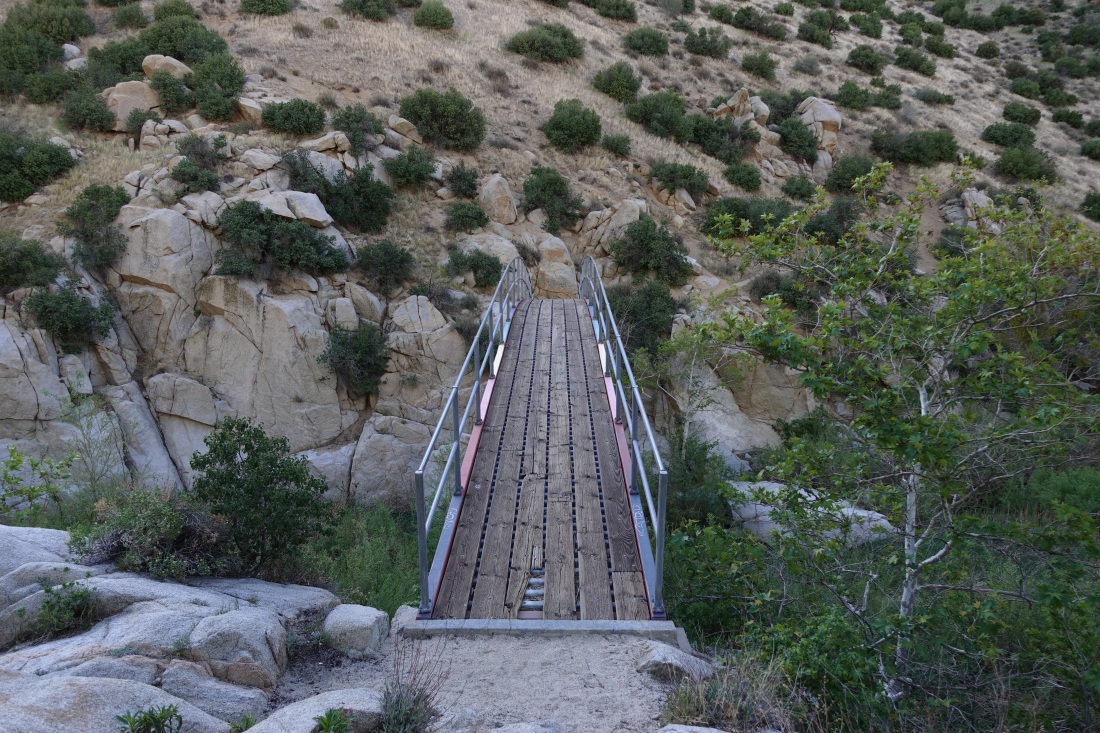 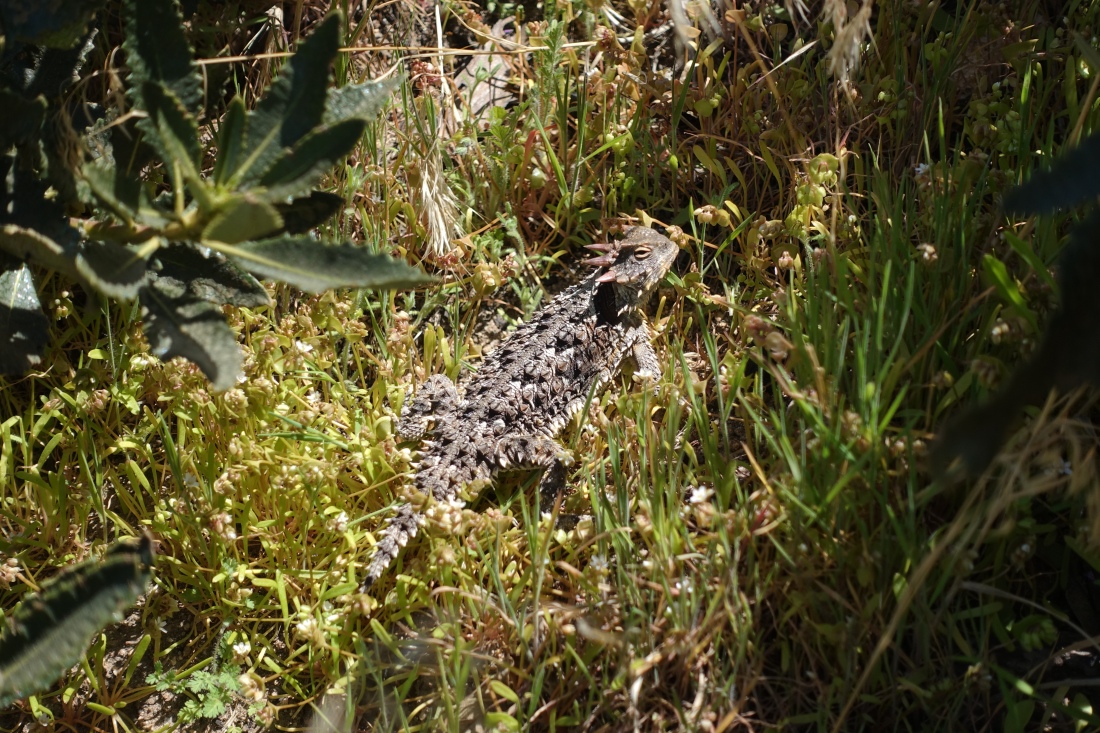 Union Jack and our camp for the night

You can see the pollution coming over the mountains from L.A. 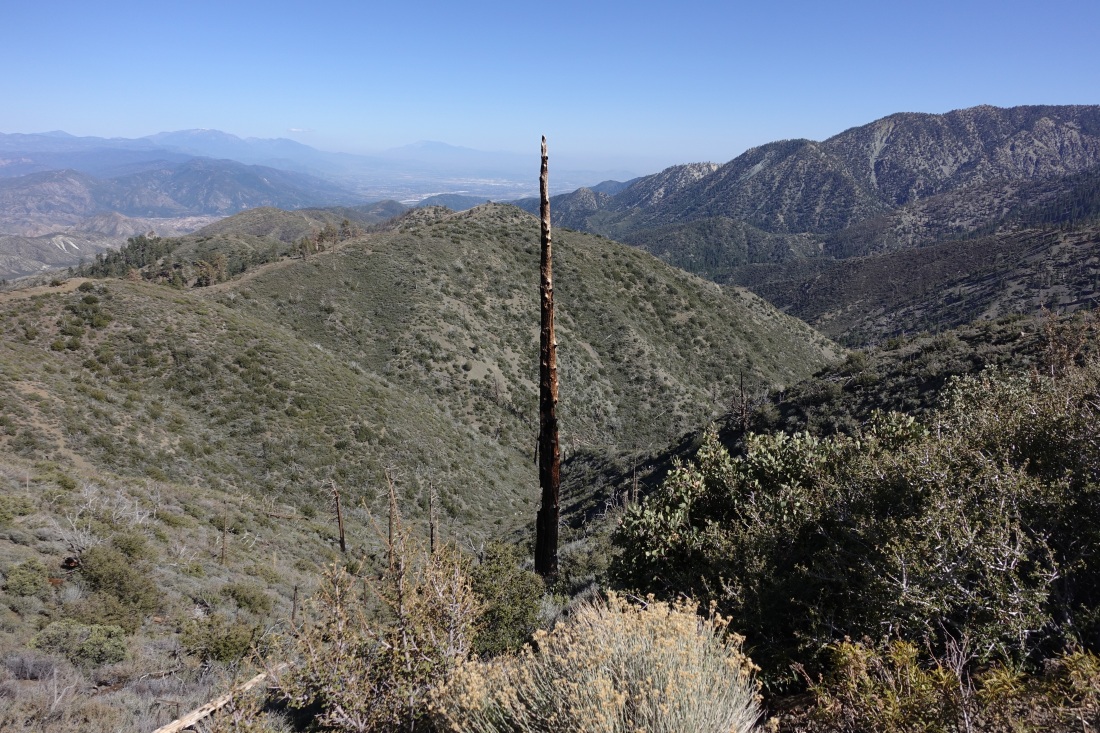 Guffy Campground all by myself

What a sunset from Guffy looking over these splendid mountains!

On the way to meet up with “Cruise Control” 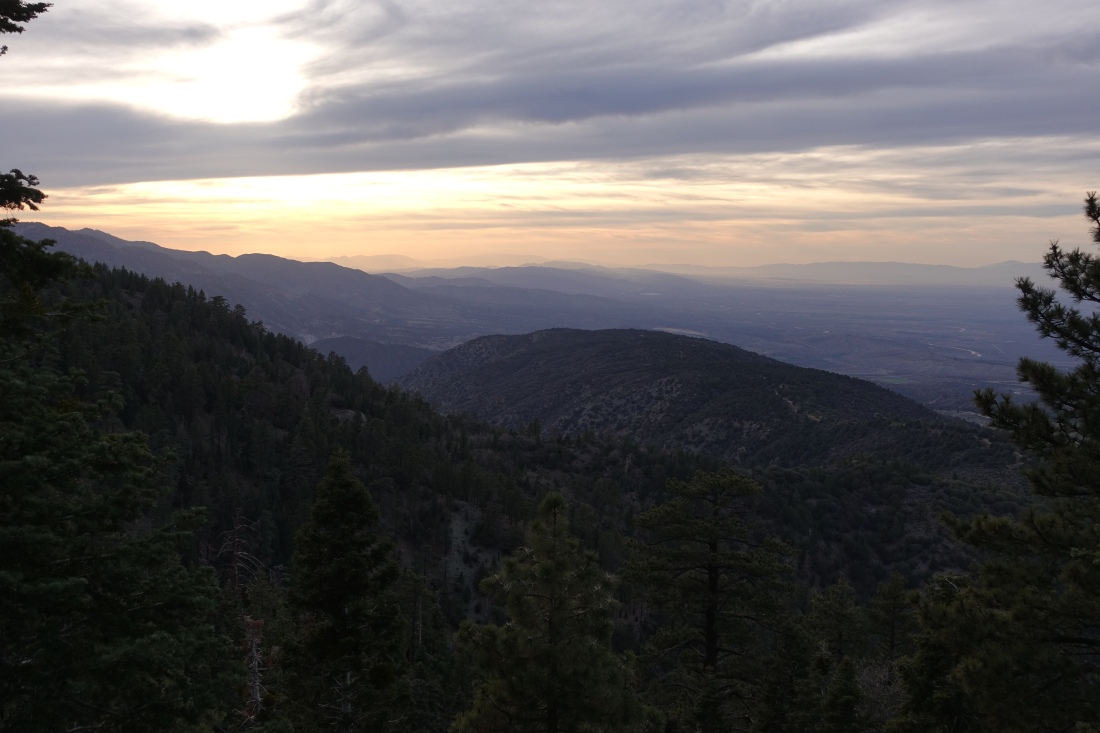 Ridges as far as you can see 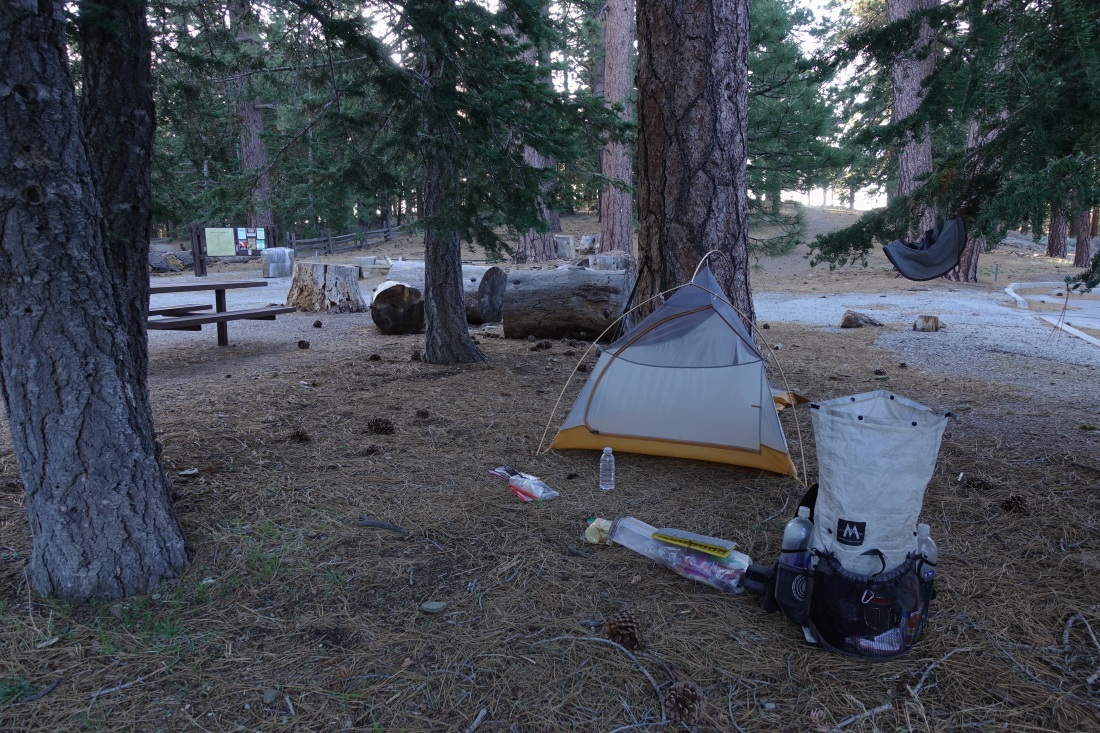 Jackson Flat Campground all to myself! 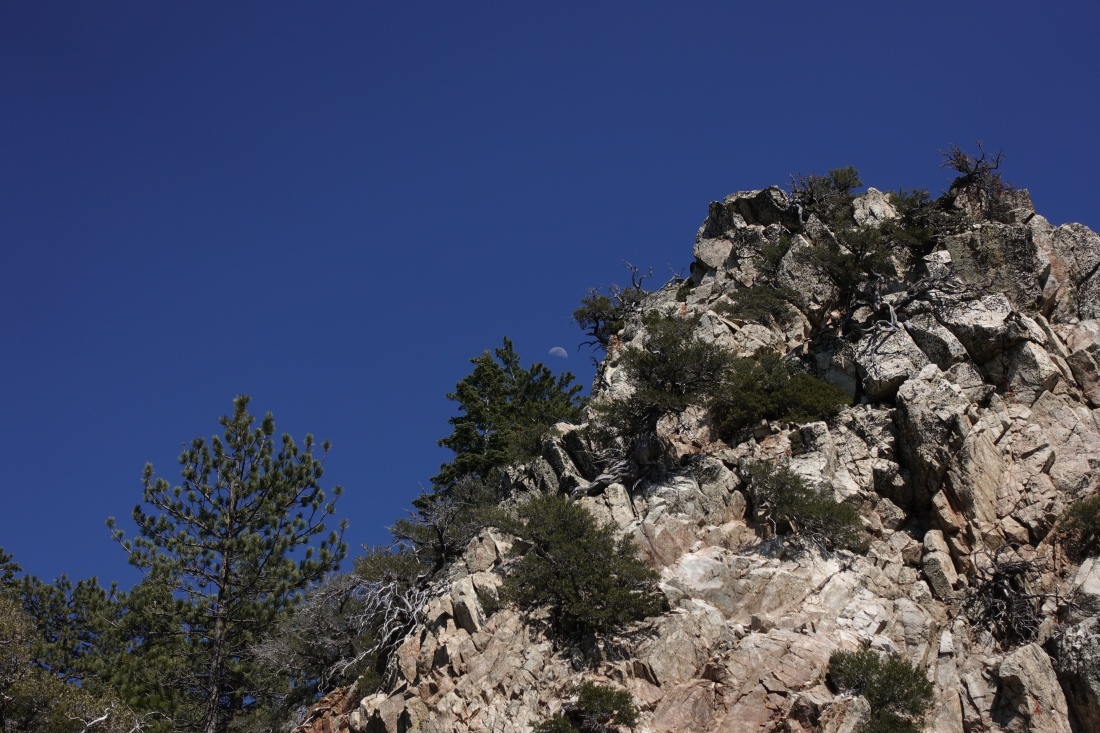 The moon peaking out over an outcrop of rocks 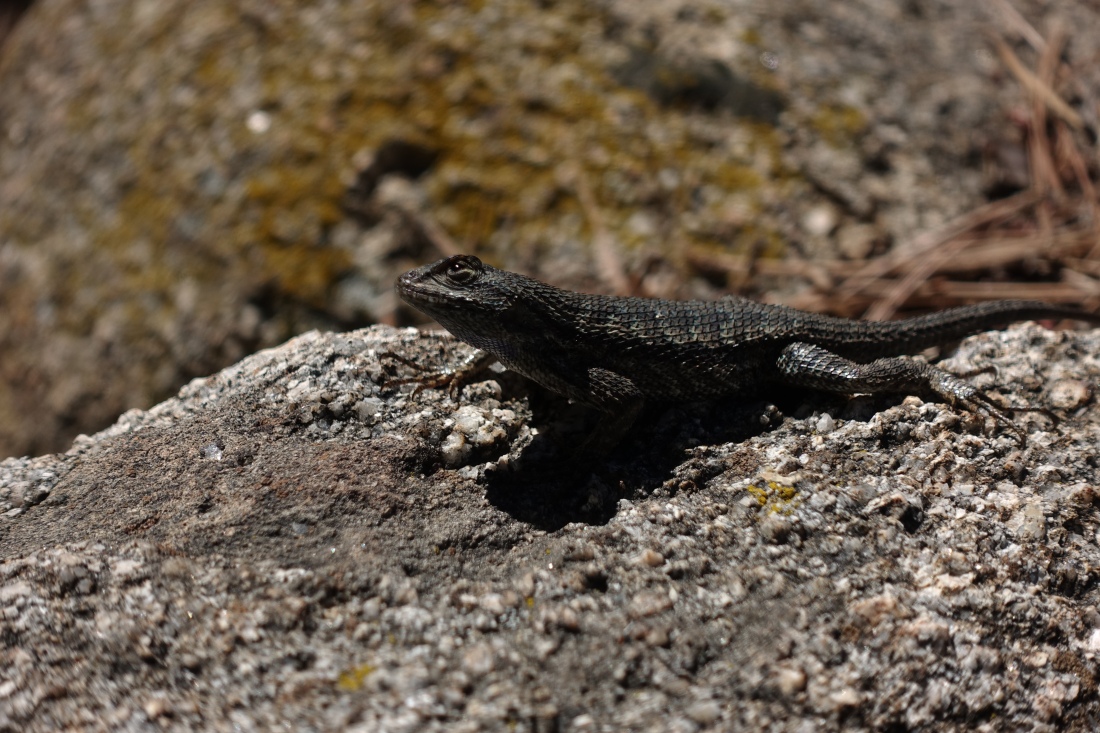 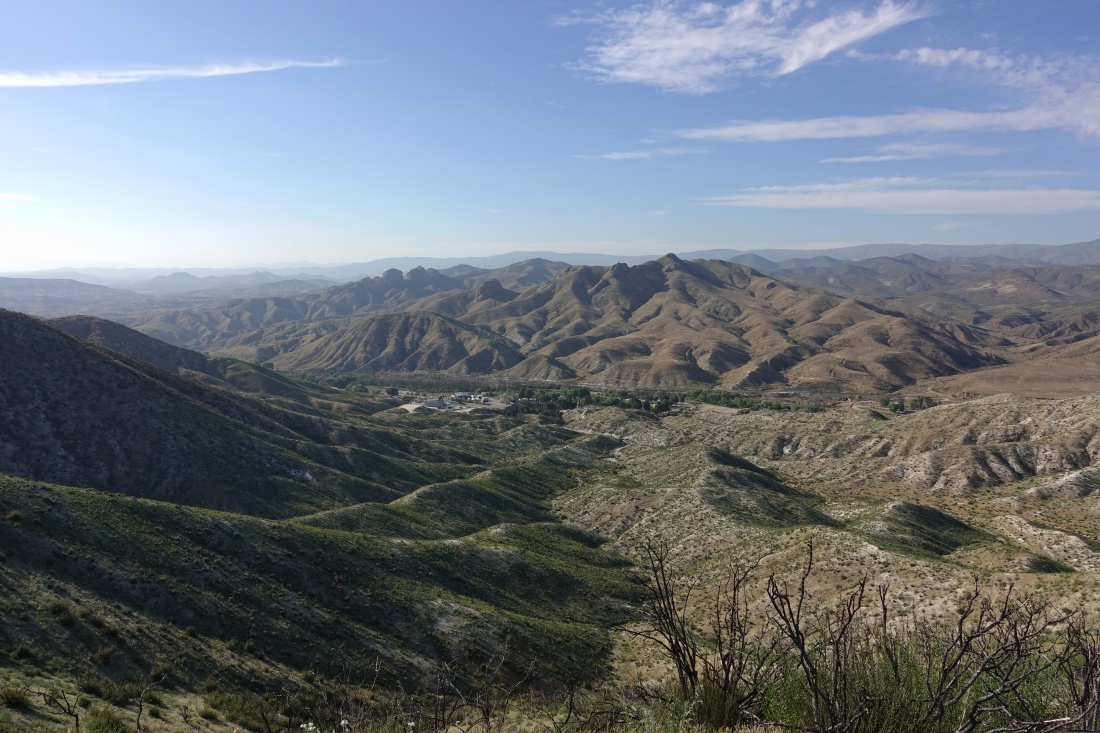 Looking down into the Santa Clara Valley and Acton, CA