Woke up at 5am and got going over Donohue Pass. That pass took a toll on Darwin and Vicious. Vicious almost really hurt his knee postholing, Darwin slipped and broke yet another pole, then got a huge snow scrape and bruise from glissading down the steepest bit of the north face of the pass. Lots of John Muir Trail (JMT) hikers coming south today. Apparently yesterday was the first official day they could begin the trail. We’ve finally entered into Yosemite National Park now and the granite goes on for what seems like forever. After arriving at Tuolumne Meadows we attempted to hitch towards Lee Vining for about 45 minutes, then I walked to the store (which was still closed) and got some trail magic chips and a beer! After the snacks, the very ﬁrst car that passed by picked me up. A retired Marine by the name of Dale who was driving erratically in his Dodge Charger on the way to teach an alpine skills course. Once Dale dropped me off in Lee Vining we all met back up and got a resupply done. After laying all our food out on the benches in front of the store and making it fit in our packs, we then walked up to the gas station and got pizza, beer, and another hitch back to the trail. Back on the trail we hiked out towards Soda Springs and drank some of that disgusting iron tasting water. Gross. Walked past Tuolumne Falls which was insanely beautiful, and full of mosquitoes. My god they came out strong!

Today went really well in my opinion. Beautiful scenery, stunning weather, and Benson Pass was one of the easiest ones yet. Barely any snow on it, but the descent was really steep and had some bits of the white stuff left to negotiate. This morning while walking through a meadow outside of camp I spotted what I thought were tracks from someone walking barefoot on the trail. Once we got to some mud I realized they were bear tracks, and a short while later Darwin pointed out the brown rear end of the bear creating the prints. Pretty cool. All in all it was a great day, quite exhausted, and tomorrow we’ll do it all again!

This morning started off really well. A couple of log crossings over streams before having to actually start fording them. At Kerrick Creek I forgot there was a log upstream, but the crossing wasn’t actually that sketchy. After Seavey Pass it was pretty cruisey until we started up towards Dorothy Lake. That valley is absolutely covered in mosquitoes, water, and mud that I fell in up to my left thigh and right elbow while running from said mosquitoes. Worst section of the trail so far. The campsite tonight is windy and cold, but at least it’s bug-free.

Started the day off with a 4:30am wake up. We got over Dorothy Pass by 7:15am and made incredible time up until the climb to the exposed ridgeline. That was a slog in every sense. Kicking steps and switch-backing up slippery scree was super challenging. Then the wind began. Seriously, hurricane force winds on the westward facing slopes. Insanely beautiful views, but unfortunately it took all of my focus just to stay on the trail itself without getting blown off. Many parts of the trail I was actually walking at a 45 degree angle just leaning into the wind. The descent towards Sonora Pass was covered in snow and very steep, but it was quick to get down! I honestly enjoyed it very much, just wished it was a little less windy. 20 miles before 2pm! New record for me that I don’t believe I’ll be breaking any time soon.

Laundry, then Snuggles drove us to Mammoth so that we could resupply. She is seriously such an awesome person. Darwin is one lucky dude. Pretty chill day overall. Dinner at Rhino’s because Burger Barn was closed. Bridgeport is an interesting little town in the middle of nowhere. The people seem nice enough, but it is definitely not catering towards PCT hikers. I would probably go to Kennedy Meadows North if I had the choice again.

Snuggles drove us back to the trailhead this morning after breakfast. $3.95 per egg was pretty absurd, and Darwin ordered four Haha! My “Chorizo Scramble” was fantastic and reasonably priced. The hike up around Sonora Peak was stunning. Red rocks jutting out over spectacular vistas everywhere you look. Weather was perfect. Lots of snow on the back side, but not unmanageable. I slipped on a rock and ripped my shorts. At least it didn’t rip through the liner as well. I’ll sew it up tomorrow night. Pretty damn tired actually with all the snow and the drastic elevation changes. Wonderful day overall I would say. Vicious wasn’t at camp when I arrived. He must’ve kept on going.

What a lovely day of hiking. I think it was my best day on trail. Lots of up and down, but nothing too crazy. The views were just otherworldly. Flowers are blooming, snow is melting, and mud is slippery. Wil even made it out to camp with us, carrying a case of 15 “Live Free or Die” IPA’s! He was a few hours late as per usual, but I’m stoked he showed up. Drank beers at the ﬁre by the lake until almost midnight. Too late, but worth it to see an old friend!

Still lots of snow, but the snow cups are showing up

The north side was slippery and full of JMT hikers 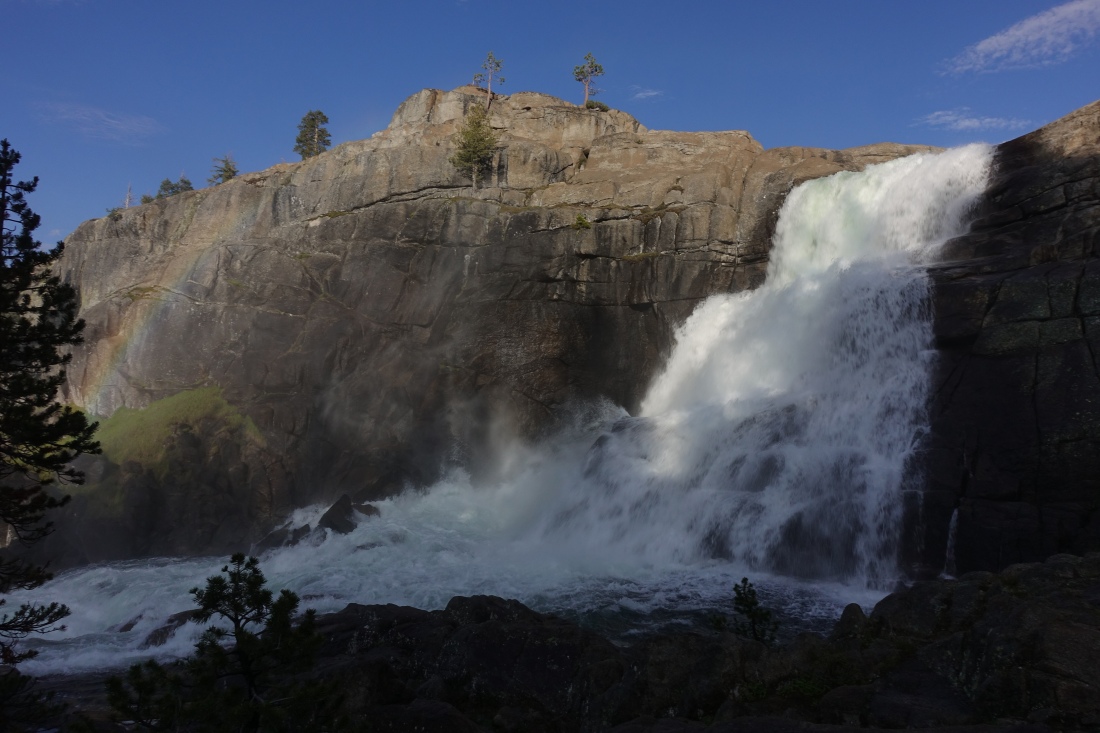 Vicious posing in the valley before the bugs

Granite as far as the eye can see

When the trail turns into granite, stones outline the pathway

Our cold but bug free campsite before Dorothy Pass

What you can’t see is how windy it was

After a brief stint in Bridgeport, back to the snow and scree! 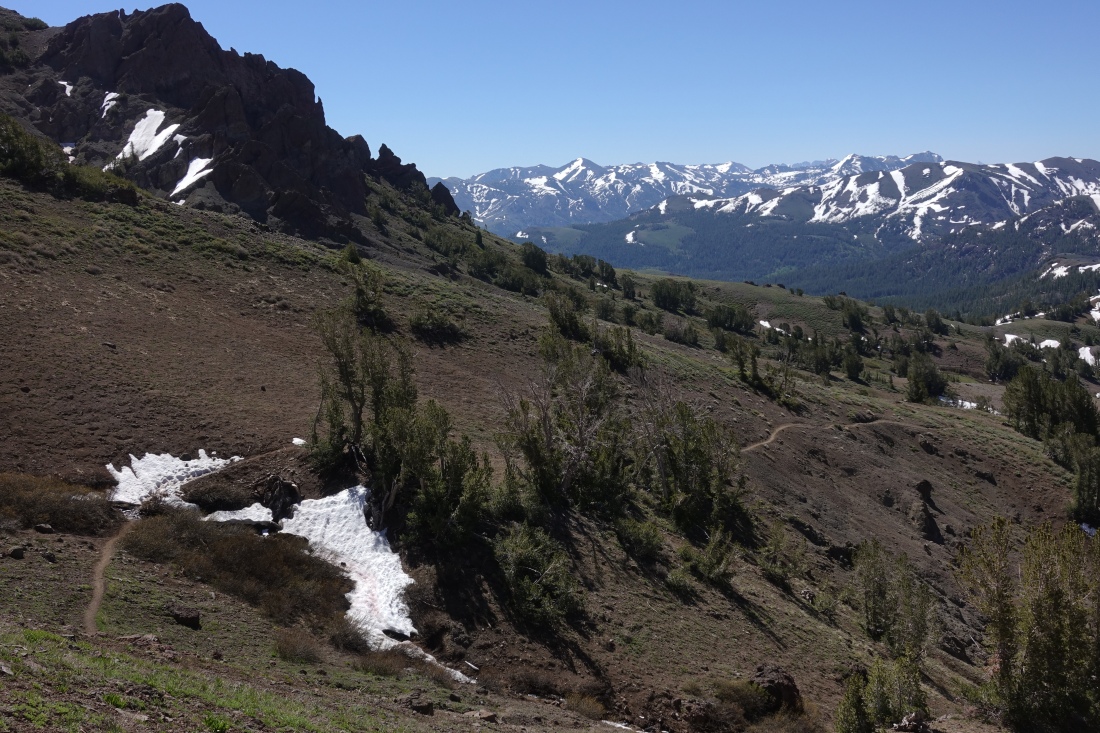 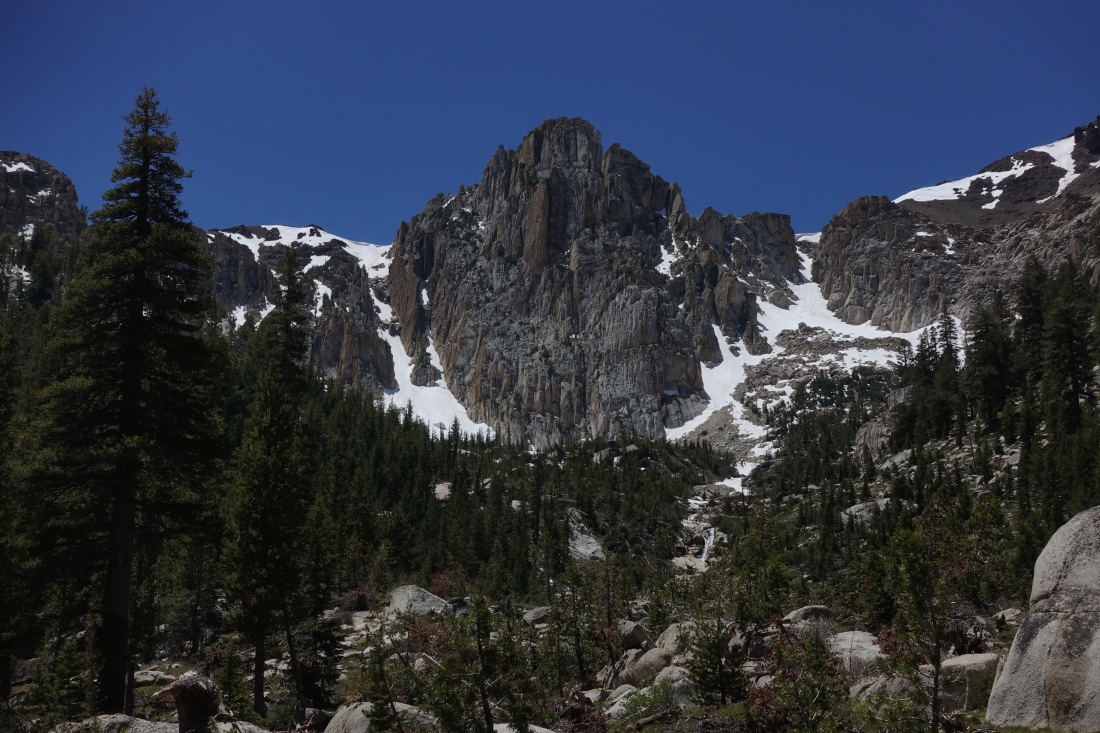 Snow is sparse in this area, but still hanging around 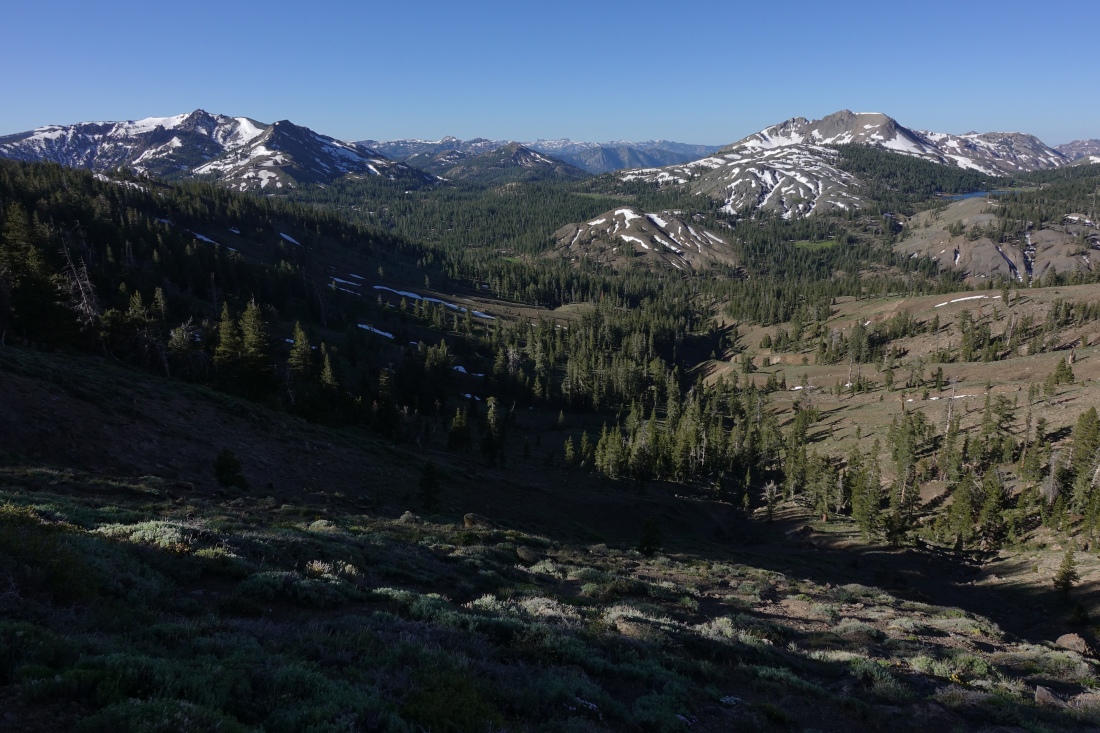 That is a welcome sight, goodbye Sierra!

The trail meanders around a bend

Here’s a link to the next weeks journal!