Today felt much longer than it needed to be. It started beautifully, albeit with huge wind gusts. Expansive views of Cabazon, Banning, and Palm Desert greeted me while descending Fuller Ridge. Once the pine trees thinned out and the switchbacks truly began, it became noticeably hotter. The further I descended from alpine mountain terrain towards the lowest point in California, the hotter, and windier, and drier it got. Just as I was beginning to get fed up and curse the trail itself, Nature jumped up and bit me. Well, stung me. Twice. At mile 202 near an enclave in the cliff side, an angry swarm of bees decided they didn’t like the way I hike and began chasing me along a precipitous edge for about 100 yards before backing off. The rest of the descent into the Mojave continued to be hot and the trail sprang to life with lizards running all over the place. One of them was the biggest lizard I have seen so far. Nearly 2 feet in length and super fat, I followed this rotund reptile until it hid underneath a rock. I couldn’t identify it but I did get a good video of me chasing after it. At the water fountain I found Rob lounging in the shade and together we decided to continue on towards I-10. After going under the train tracks and interstate we thought it was a good idea to try and hitch into Cabazon on Tamarack Road. Tamarack is a dead end. Luckily Hillbilly picked us up and took us to his place for some Moonshine, beers, and a cool PCT Buff as a gift. This trail is amazing. There were a couple other hikers taking some rest days at Hillbilly’s when I arrived including a hiker named Guy, but there was just enough room left to stay that night and enjoy the company of a truly unique Trail Angel.

Picked up my packages at the post oﬃce. Mailed back my Darn Tough socks which were replaced by Cloudline socks. Thanks Austin! Afterwards Guy and I ate an amazing breakfast burrito at the convenience store up the road from Hillbilly’s. Got food for the next few days at Dollar General which was the best/cheapest resupply so far. Then met up with Rob at Holiday Inn and we drank beers in the hot tub. Tough day… windy as hell though.

This morning Hillbilly was nice enough to pick us up from Holiday Inn and drop us back at the trail. Guy, who I helped drop some weight from his pack when I stayed at Hillbilly’s place joined us to start also. Rob and Guy decided to stay at the Whitewater River, and since it was only around 3pm I pushed onward another 6 miles to the Mission Creek campsite. Unbelievable views of the southeast ridge of San Gorgonio and surrounding mountains greeted me on the hike over. It was quite hot, but the surroundings more than made up for it. I met another hiker on the way over to Mission Creek named “Diggy” who ended up camping near me as well. Tonight I get to go to sleep listening to frogs rib-bit and the gurgling of Mission Creek.

What a drastic change of both elevation and scenery throughout the day. Starting off this morning wandering along the Mission Creek bed until ascending up into the Lake Fire burned area was an ethereal experience. No more water after lunch meant that I would have to carry close to 4 liters if I wanted to get up Onyx Peak tomorrow. I hiked most of the day with Diggy who told me about her experiences trekking all of the “Great Walks” in New Zealand, which is an incredible feat. I only had the chance to hike one while I was there (Rakiura). Near the abandoned Coon Cabin water cache Diggy found someone’s lost food bag and was willing to hike it out towards Big Bear in order to find the owner once we got to town. That food bag must’ve weighed 3 pounds, so I gotta give it to her for humping the extra weight just to potentially help out a fellow hiker. Tonight I camped with her and another hiker named “Shy Guy” (later renamed “Shy Bear”). Really great day overall, little bit grueling at times, but worth every step. My little toe on my right foot is hurting a bit, as well as my right big toe. I know these shoes are too small for me, but hopefully tomorrow they’ll feel better. Also, Diggy gave me the trail name “Cruise” since I cruise along the trail and kinda look like I belong on a cruise ship or at some touristy destination with my hiking clothes. I’ll take it, “Terminator” was a bit too macho for me anyway.

Freezing cold start to the day. Probably didn’t help that we camped at 8,743ft. Once I got going though everything warmed up and my foot felt ﬁne. Cruising along the trail was pretty easy today. Little up, little down. Didn’t get to hike up Onyx Peak, it seemed kind of like a 4wd road without a prominent peak. I got some really great views of the Mojave Desert before descending into Big Bear. Just before the Hwy I drank a Diet Mountain Dew thanks to Trail Angels. I got a hitch to Dollar Tree/Vons Supermarket by a local older guy named Ted, then immediately after getting my resupply finished I got picked up by Mountain Mama (Big Bear’s local TA) and Diggy outside Vons. Mountain Mama invited us to come and stay at their home tonight! This trail is amazing!

Sleeping at Papa Smurf and Mountain Mama’s was an interesting night. I slept in the middle of a triple bunk bed just outside of their kitchen. It was like sleeping in a coﬃn, but oddly very comfortable. Maybe because I am dead tired. Started a bit late from Mountain Mama’s place and didn’t begin hiking until about a quarter past 9 unfortunately. Papa Smurf dropped us off at the Hwy access and I booked it. Made 9 miles in 3 hours, which is pretty impressive with my short legs! Then made it to Little Bear Springs just before 5. The wind was HOWLING! Almost got blown off the trail multiple times. I passed Smiley again today, only issue was that she had just fallen and hit her head causing a big cut above her left eye that looked like what boxers get when ﬁghting. “Cut me!” (imagine that in Sylvester Stallone’s “Rocky” voice) As I walked into Little Bear Springs I met “Darwin” and “Fatpack” and we were all pretty perplexed as to what our plan should be since it was so freaking windy. I went scouting for a place down near the creek and found a sheltered little spot amongst the brush. It was surrounded by dead shrubs which protected large wind gusts, but there were lots of rocks and not much truly flat area. What a crazy day.

I woke up freezing cold at 7:15am, just a little late. Didn’t start going until almost 8am. Ice all over everything could’ve been the culprit to my late departure. My water bottle had also frozen solid. Either way, the wind had stopped and I was very thankful for that. Still a bit balmy even after I was hiking, had to wear my puffy and base layers all morning. The scenery kept getting better the further into Deep Creek that I walked. The ﬁrst bridge I crossed over at Splinters Cabin had a lovely spot for lunch by the water with trout swimming around everywhere. Smiley was enjoying the beach area when I arrived and we had a lovely conversation during lunch. Around 5pm I rolled up to Deep Creek Hot Springs. This place is a gem along the PCT. Piping hot water sent from the Trail Gods themselves to soak your feet in while watching a bunch of nudists walk around. I had a conversation in Chinese with a naked vagabond hitchhiker guy. That was a ﬁrst. His brothers girlfriend was from Tianjin (where I studied in China), what are the odds?!? Man, what a weird, awesome place. 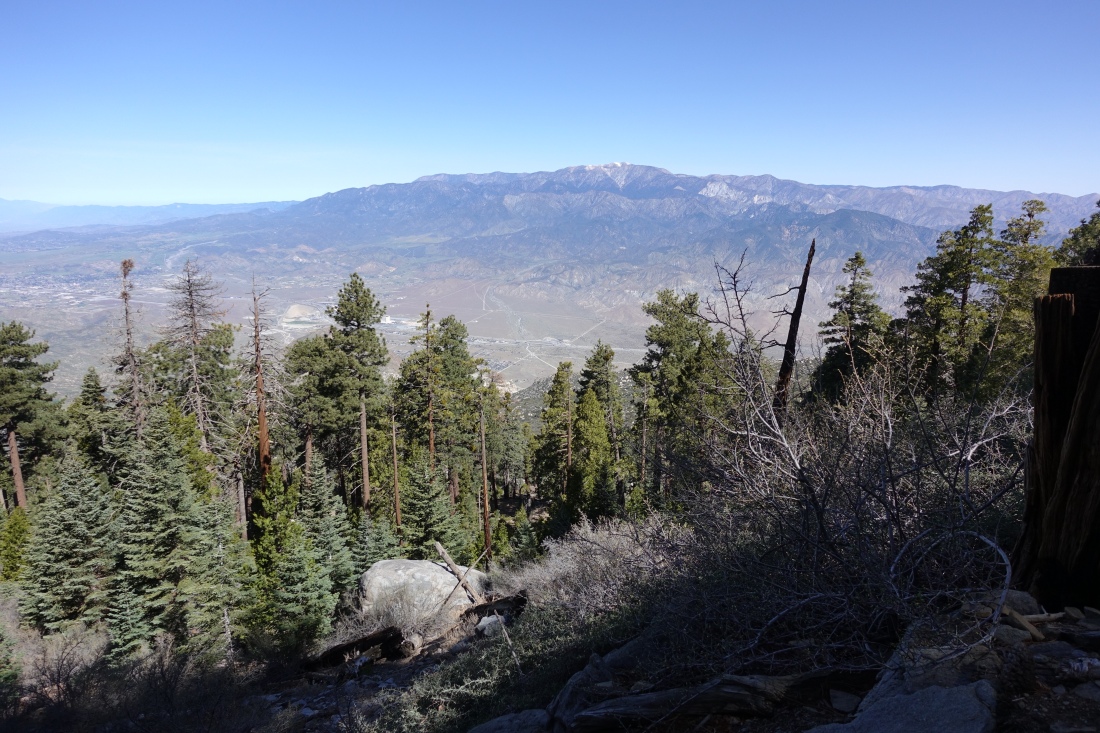 San Gorgonio and the desert below

Rob and majestic Mt. San Jacinto on the way towards I-10 Oasis 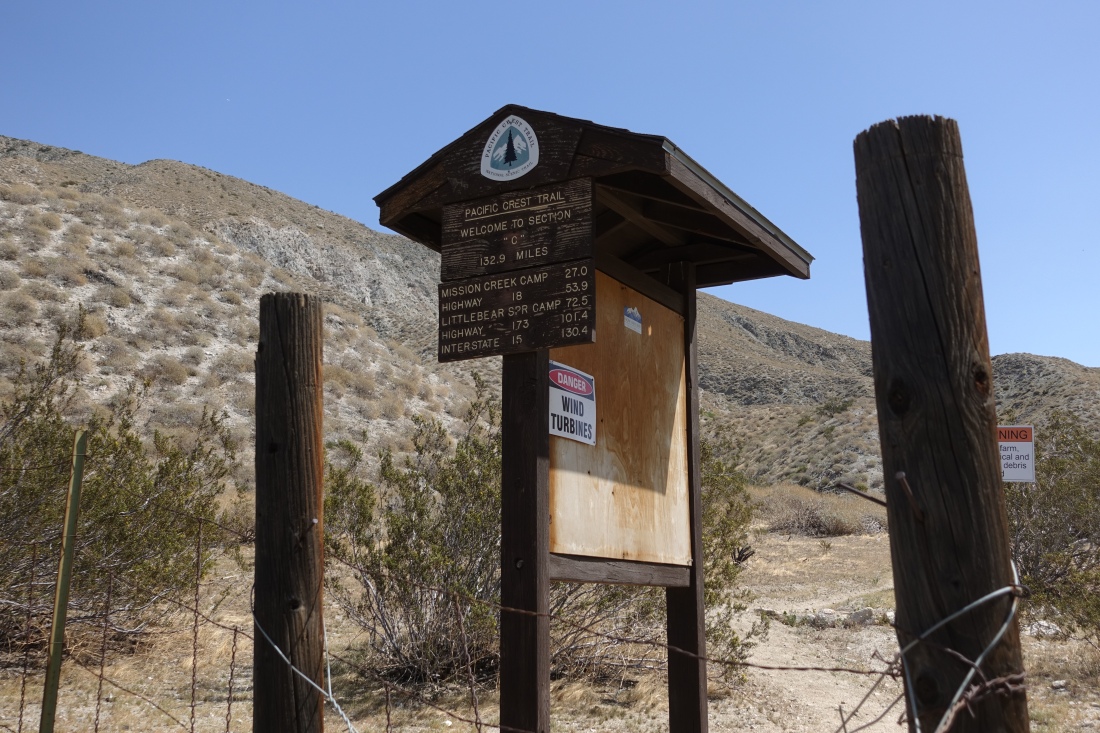 Beginning Section C and the windiest part of the trek 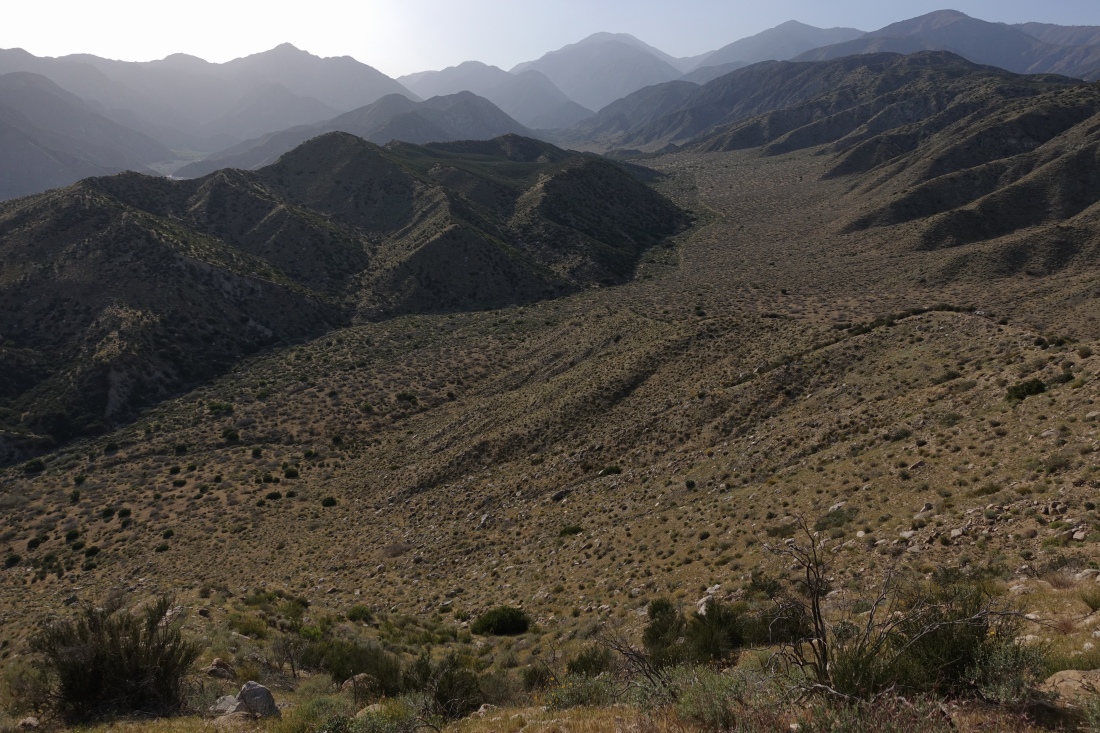 Gorgeous views on the way over to Mission Creek

There is life in the desert! 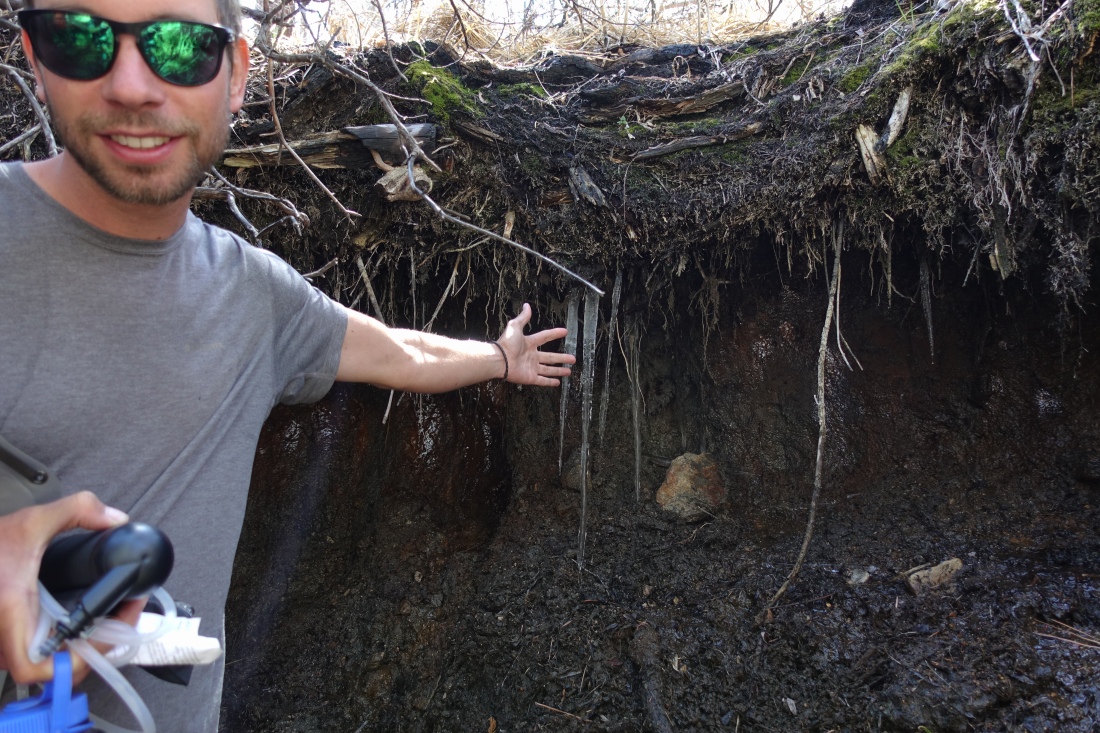 It got kinda cold last night at the spring! 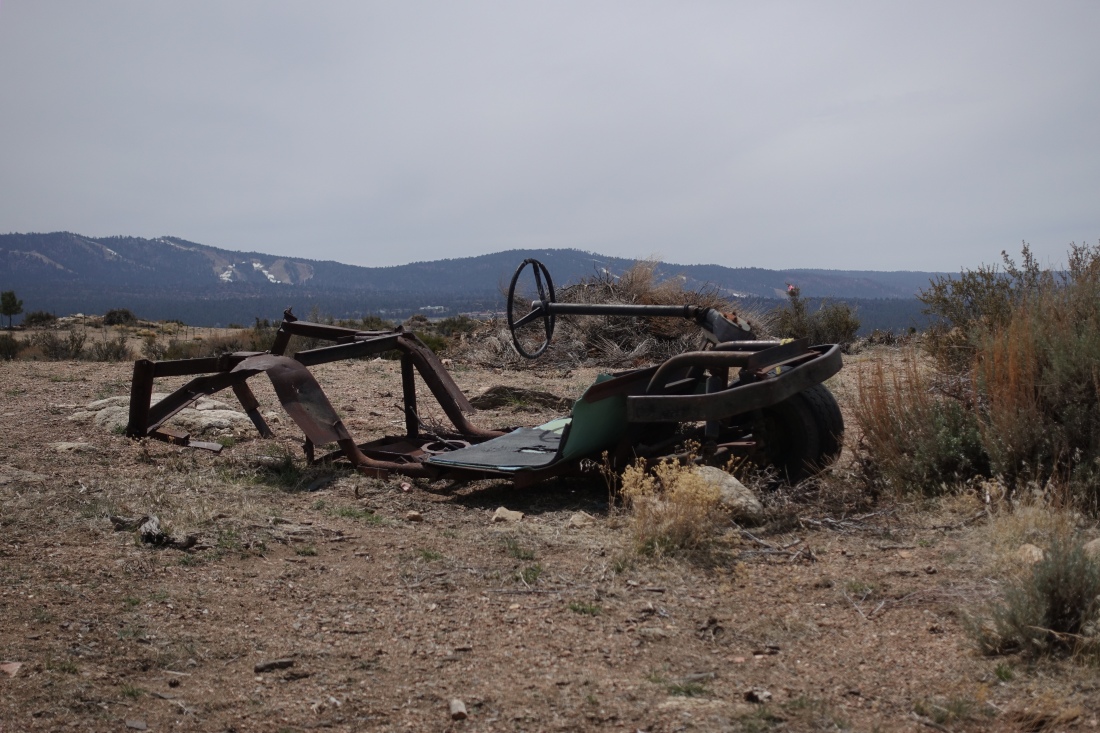 The desert records another victim

Diggy enjoying a nice beverage from a Trail Angel before Big Bear, CA 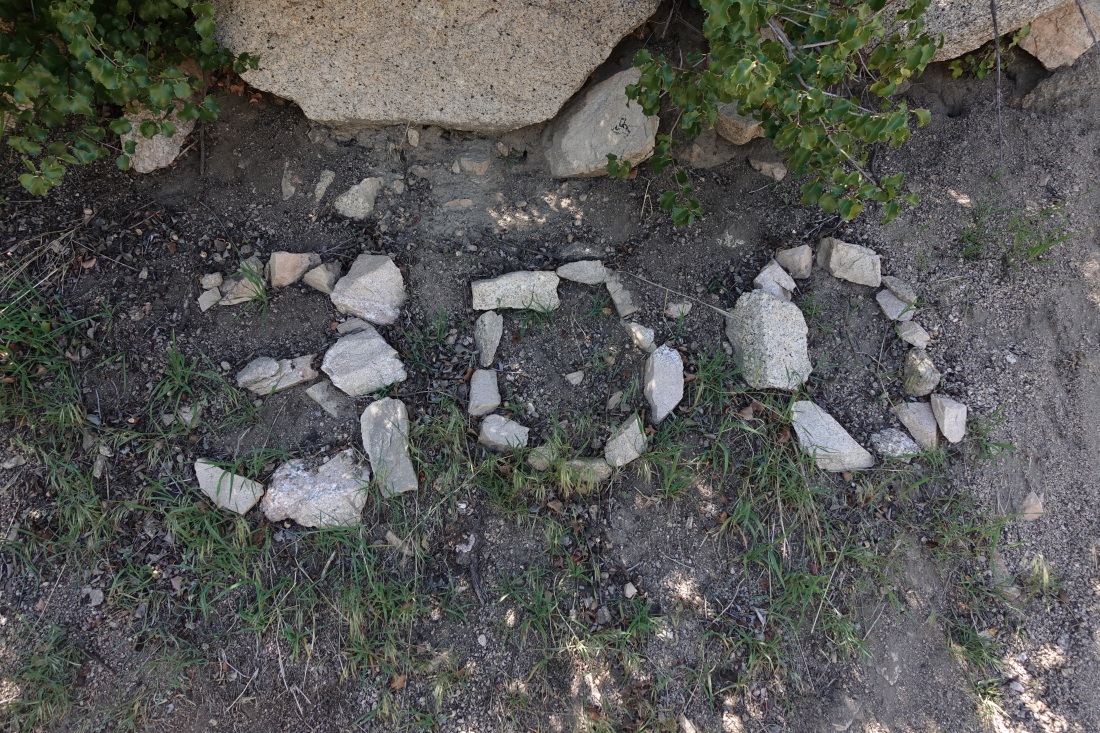 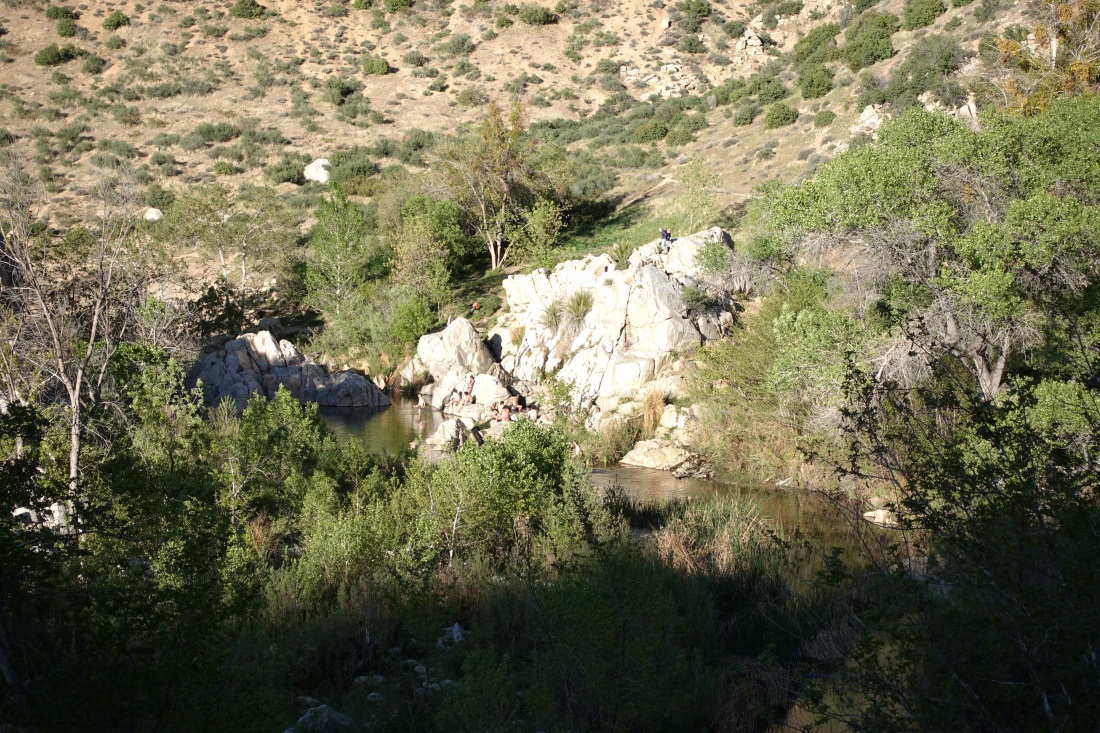 And, of course Deep Creek Hot Springs (you can actually see naked people if you look closely)